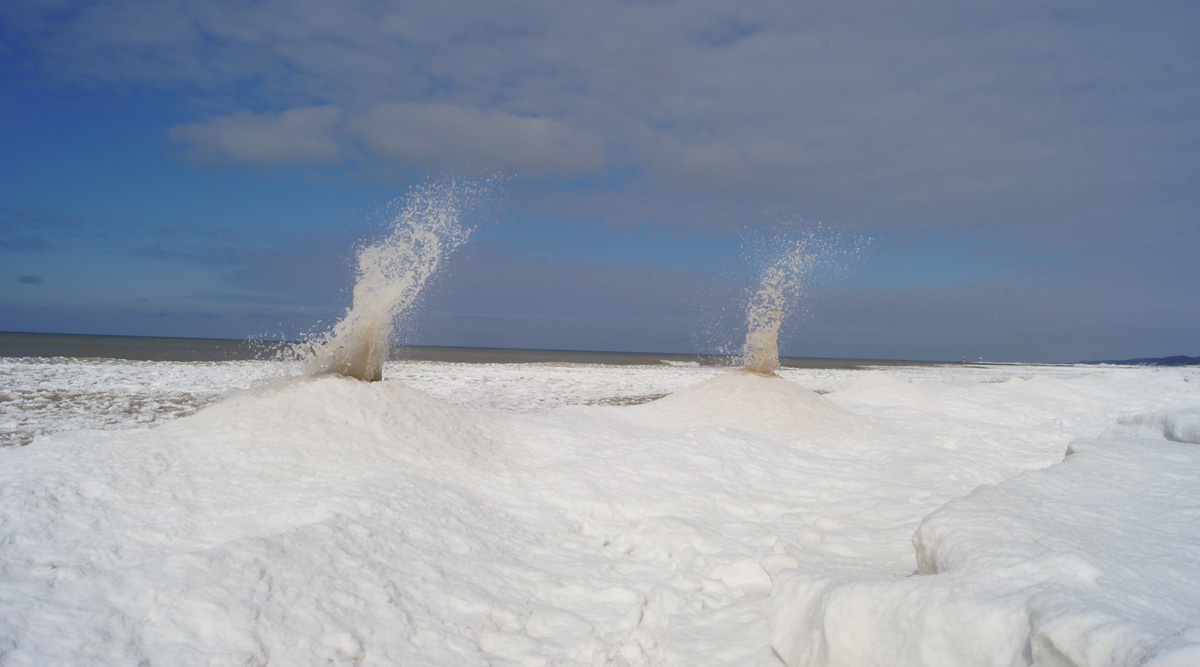 A bizarre video of ice volcanoes plummeting on the shores of Lake Michigan is going viral. The National Weather Service (NWS) in Grand Rapids captured the phenomenon at Oval Beach in Saugatuck in Mich on Sunday. Called ice volcanoes they are cone-shaped mounds of ice formed as a part of the leading edge of an ice shelf as they build into a lake. NWS tweeted saying, "You never know what you'll find at the lake until you go out there. Today it was volcanoes." Indonesia: Volcano Erupting From Mount Merapi Spews Ash and Fiery Red Molten Lava.

Although they have volcano in their name, they do not erupt molten magma. Researchers at Michigan Tech noted, "after the ice shelf has built out, waves continue to travel underneath the ice and are forced up through cracks and previously formed cones." Cort Scholten, a meteorologist with the NWS Grand Rapids, told the Detroit Free Press that ice volcanoes generally form on shorelines where waves strike "with some force." Taal Volcano Erupts in Philippines, Terrifying Pics and Videos of Smoke and Ash Clouds Go Viral.

NWS Grand Rapids posted a picture of ice volcanoes with the caption, "It was a great day to visit the beach and watch the waves interact with the ice. Here's a couple 'ice volcanoes' erupting at Oval Beach on Sunday, February 16, 2020."

It was a great day to visit the beach and watch the waves interact with the ice. Here's a couple "ice volcanoes" erupting at Oval Beach on Sunday, February 16, 2020. #miwx #wmiwx pic.twitter.com/B0Vkl18RrN

Spholten told the Free Press, "The waves...were strong enough so the water channels through, it squeezes water upwards and tosses the floating ice up. As it happens, over the course of hours or days, it forms a cone, and it resembles a volcano." Researchers at Michigan Tech said that ice volcanic cones range in size from less than one meter to bigger than eight meters high. The largest cones are typically near offshore sand bars and rock reefs.