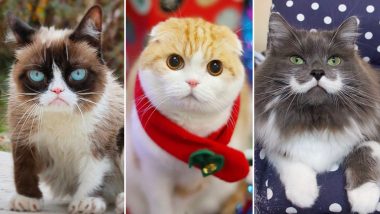 International Cat Day is observed on August 8 every year to celebrate cats. The day was created in 2002 by the International Fund for Animal Welfare. The observance is also referred to as World Cat Day in some countries. Cat is one of the most loved pets and people often share pictures of feline on social media handles. And their funny pictures have made them quite famous on Instagram often resulting in funny memes and hilarious GIFs. In fact, some of the famous ones have verified handles and get celebrity status on the social media platform with millions of fan following. Some of them would be quite familiar to you like Grumpy Cat, Waffles and Hamilton. And as we observe International Cat Day 2020, we bring to you some of the most popular cats of Instagram. New Grumpy Cat on The Internet! Kitzia, the Angry Feline Goes Viral For Her Forever Annoyed Expressions (Watch Pics and Videos)

International Cat Day has been receiving a lot of responses since its first observance. Every year people take to social media with the photos of their cats. The day also highlights animal rights and incidents of cats suffering at the hands of humans. On International Cat Day 2020, here is a list of cats who rule on Instagram. Grumpy Cat 2.0! Meet Angry-Faced Louis from Texas Who’s Probably the Next Feline Internet Sensation (View Pics and Videos)

You would have all seen Grumpy cat at least once on Instagram. His facial features make him look like he is grumpy all the time. However, cat Tardar Sauce passed away on May 14 after becoming popular in 2012. And that is what has made the cat popular. Grumpy has over 2.6 million followers.

Nala Cat, the Siamese-Persian mix is popular for her stunning blue eyes. She is also a Guinness World Records title holder for the most followers on Instagram for a cat. Nala won the title when she had 4.3 million followers, now she has 4.5 million followers.

Waffles, a Scottish Fold became popular recently. The orange-and-white little guy was not able to find a home as he was 'ugly'. Waffles were often rejected by people who came to adopt pets. He found its hooman when he was seven years old. Once called ugly, the kitten became popular among fans. Waffles have over 9,19,000 Instagram followers.

Lil Bub was one of the internet's most famous cats. It died last year when it was only aged eight. The little one was known for its eyes and protruding tongue. She became popular after being rescued from an animal care. She had dwarfism that made her stay little for a long time, but during its lifetime helped her owner raise more than $700,000 for animal charities.

Hamilton the hipster cat is known for its white moustache shaped mark on his face. Hamilton is a feral cat which means he was born and raised without human contacts. It's Hamilton's moustache that netizens love the most. And soon Hamilton became an overnight sensation with people calling him the new Grump Cat. The feline has over 7,95,000 followers on Instagram

Pudge has over 6,61,000 followers on Instagram. Its white moustache has made it famous on social media. Called 'Queen P' based out of her Minneapolis home, the cat spends most of the day sleeping or doing a photo shoot. Her fluffy coat mixed in chocolate colour makes her Instagram's favourite.

Sam has garnered over 2,36,000 followers on Instagram for having eyebrows. Well, a cat with eyebrows is a rare coincidence and Sam seems to have understood that.

What you actually look like when you type ‘lol’

Cats have an altogether different kind of audience on Instagram. They are famous and often their pictures and videos go viral. To all cat lovers out there and to their cattys, we wish you a Happy International Cat Day.

(The above story first appeared on LatestLY on Aug 07, 2020 08:00 PM IST. For more news and updates on politics, world, sports, entertainment and lifestyle, log on to our website latestly.com).