International Dance Day 2022: Five BLACKPINK Music Videos That Will Make You Want To Dance Right Away!

K-pop girl group BLACKPINK has become very popular for their catchy songs and unique dance moves; the choreographies are perfectly structured around the themes of their music videos. They also have some well-known hook steps. On the occasion of International Dance Day 2022, let’s look at some of BLACKPINK's most popular dance and music videos. 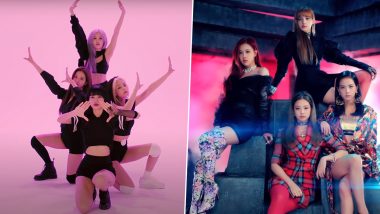 The day is a global celebration of dance and appreciates different genres and techniques that have come up in the years. Korean pop music and the dance styles featured in their videos have also gained alot of popularity for their fusion of different hip-hop and freestyle moves. K-pop girl group BLACKPINK is famous worldwide for their catchy songs and unique dance moves; the choreographies are perfectly structured around the themes of their music videos. They also have some well-known hook steps. On International Dance Day 2022, let’s look at some of BLACKPINK’s popular dance and music videos.

One of their most popular music videos that broke records and got them international acclaim is "Ddu-Du Ddu-Du", their lead single from their first Korean language EP. The hook step of the music video became famous, and the whole choreography in the grand music video got a lot of attention.

The dance routine of "Whistle" instantly became very popular with fans of BLACKPINK and people of the dance community. Alot of people tried recreating the footwork on the catchy tune.

"How You Like That" was the lead single from their first Korean Language studio album called The Album, the music video for the song was created on an immense scale. There were also a lot of background dancers involved. The band’s official Youtube page also released an official dance performance video that has gained over a billion views.

This music video has 1.5 Billion views, and the tune is straightforward to remember. It gets stuck in your head, and so does the choreography. The choreography is perfect, especially with the mix of different styles of dancing involved.

"Lovesick Girls" is a very pop song with different layers of performances showcased, but it is also a recurring bit of perfectly synced hook steps that band members have performed on shows many times.

BLACKPINK’s dance routines have become so popular that a separate playlist is dedicated to their dance practices on their official Youtube page, with the videos amassing millions of views. International Dance Day celebrates the spirit of dance and is a global celebration of the dance community.

(The above story first appeared on LatestLY on Apr 29, 2022 11:24 AM IST. For more news and updates on politics, world, sports, entertainment and lifestyle, log on to our website latestly.com).