International Snow Leopard Day 2020: Did You Know These Large Cats Are Known as 'Ghosts of the Mountain'? Know Interesting Facts About the Endangered Animal 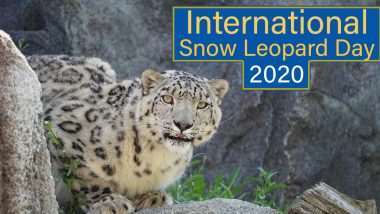 International Snow Leopard Day is observed on October 23 to raise awareness on protection of snow leopards which are endangered. They are majestic and found int the high mountains of Asia. Their body structure is perfect for the cold weather and spends their life crossing thousands of kilometres to feed and breed in the world. They are rarely spotted by wildlife photographers as they prefer to live alone deep in the jungles. And for the same reason, they are called 'ghosts of the mountain'! As we observe International Snow Leopard Day 2020, we bring to you interesting facts about the animal. Being endangered it is important to save them from further extinction. Can You Spot a Snow Leopard in This Pic? Photograph of Big Cat Hiding in Plain Sight Goes Viral.

International Snow Leopard Day came into being on October 23, 2013, when political leaders from 12 countries came together for the first time to endorse the 'Bishkek Declaration' on the conservation of snow leopards. Global Snow Leopard and Ecosystem Protection Programme (GSLEP) was also launched on this day to address high-mountain development issues using conservation of the snow leopard as a flagship. Thus October 23 was chosen to be recognised as the 'International Snow Leopard Day'. We bring to you some popular facts about snow leopards. Snow Leopard Cub Reintroduced in Himachal Pradesh's Spiti Valley, Experts Anxious.

Snow leopards can get camouflaged often in the wild with their long fur and distinctive markings helping them in the act. Some snow leopards can leap upto 9 metres also. There could be as few as 4,000 leopards in the wild, but the exact number is not known. They are threatened due to habitat loss, human-wildlife conflict, less prey, poaching illegal trade and climate change.

(The above story first appeared on LatestLY on Oct 23, 2020 07:40 AM IST. For more news and updates on politics, world, sports, entertainment and lifestyle, log on to our website latestly.com).