Is the Pic of Python Resting Between the Front Wheel of an Aircraft From Indira Gandhi International Airport amid the Lockdown? Fact Check Behind the Viral Tweet 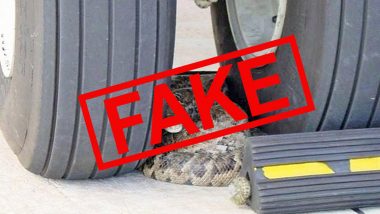 Python resting between the front wheel of A320 aircraft standing at IGI Airport is fake? (Photo Credits: Twitter)

Has a python come out during the coronavirus lockdown and is chilling at the IGI airport or is it a fake picture just like the humpback whales? Ever since the coronavirus lockdown has begun more and more people are sharing pictures of animals and birds being comfortable in nature with fewer people on the streets. Recently, there were dolphins spotted near Mumbai and Twitter is filled with pictures and videos of animals and birds coming out on the streets. The most recent one shows a picture of a big python resting between the front wheel of an aircraft in the Indira Gandhi International Airport, but is it a recent picture or even a picture from India? Let's figure out!

In a picture that is now going viral, you can see a huge python curled up and resting between wheels of an aircraft. "Animals are seeking shelter amidst clean nature ... Python resting between the front wheel of A320 aircraft standing at IGI Airport due to closed services of aircraft during the lockdown" Rajiv Pratap Rudy, Former Union Minister, Government of India wrote on Twitter. Python Covered With More Than 500 Ticks Rescued From Swimming Pool in Australia, View Pictures.

With more and more people are saying that because of lesser pollution and fewer people on the roads, animals are finally enjoying some peace outside, it is very easy to believe that the picture is true! Recently, so many pictures and videos of creatures like dolphins, deer and peacocks were spotted at various parts of Mumbai and it was being said that human inactivity has helped these animals come out and explore the city. But this python picture, is this from the lockdown or just an old picture going viral on social media with false context? Peacocks, Deer And Dolphins Spotted in Mumbai! Animals Seen Roaming Freely As Humans Remain in Lockdown (See Pictures & Videos).

Check Picture of Python Shared by Rajiv Pratap Rudy, Former Union Minister, that says it is a Python Resting Between the Front Wheel of an Aircraft at Indira Gandhi International Airport :

Just like many others sharing old pics and videos with false, misleading context, this picture is more than 10 years old. This 13-year-old picture from the USA is going viral now under the caption that says it is from India and that the python has come out amid the lockdown looking for shelter! Fodnews.com shared the picture in 2010 saying how a "crewman taking care of this unusual preflight problem".

Moreover, under the tweet by Rajiv Pratap Rudy, a man shared a screenshot that shows that the picture was way older and not from Delhi amid the lockdown. Check Tweet:

Sir this is 13 year old picture from USA pic.twitter.com/Fa6vHb8Oxm

This 13-year-old picture from the USA

(The above story first appeared on LatestLY on Apr 18, 2020 10:03 AM IST. For more news and updates on politics, world, sports, entertainment and lifestyle, log on to our website latestly.com).