Mumbai, one of the busiest cities in India have been witness to some of the rarest sights in recent days. From dolphins, deer to peacocks were spotted at various parts of Mumbai in the recent days. 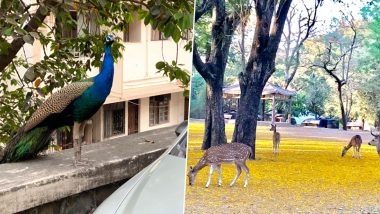 As world countries have declared coronavirus lockdown confining humans to their homes, animals seem to be on the loose. Innumerable stories of animals roaming freely on streets have been reported across countries. Mumbai, one of the busiest cities in India have been witness to some of the rarest sights in recent days. From dolphins, deer to peacocks were spotted at various parts of Mumbai in the recent days. Isn't it amazing how a few days of human inactivity have helped these animals come out of their den? As people continue to be in their homes, we bring to you videos of animals unleashed in the city. Civet in Kerala to Dolphins And Swans in Italy, Watch Videos of Animals And Birds Roaming Freely During Coronavirus Lockdown.

And it is not just the rare animals which are spotted in the city, but some amazing birds too. People have taken to the Twitter sharing videos and pictures of birds from their balconies, seen visiting nearby trees. Some also mentioned on Twitter that the chirping of birds can be heard clearly from their homes in a city like Mumbai where traffic never stops. With reduce vehicles and pollution, Mumbaikars are being treated some high dose of nature.

Dolphins were spotted off Mumbai coast during the nationwide lockdown. Videos and pictures shared on social media show these marine animals taking a splash near Marine Drive. In one of the videos, two dolphins were on the surface of waters while recording the video.

Residents of South Mumbai are capturing these beautiful visuals 💚 🦚 More reminders everyday for all who had stopped to pause and notice, we share our world with many beautiful species. pic.twitter.com/nJYRWIWboV

Spotting a peacock in a city of Mumbai is just unbelievable, but seen at Khareghat Parsi Colony in Tardeo recently. Residents of the area who couldn't believe their eyes shared the videos and pictures on social media platforms. Celebrities including Juhi Chawla and Dia Mirza also shared pictures of these beautiful creatures on Twitter.

#Nature is healing itself amidst our #lockdown. #Deers were spotted at #SGNP in #Borivali. The message is clear - we need to find better ways to co-exist.

Some deer were spotted near the roads of Sanjay Gandhi National Park in Borivali. Generally, crowded with visitors, animals are hardly seen in these places. They were capture grazing lazily with no human in sight.

As people continue to be in quarantine, animals and birds have reclaimed their space. With no human interference, they have started walking freely to places they wish with no worry. Nature seems to be healing as it now getting what it lacked. There has also been a betterment in the air quality at many places across countries.

(The above story first appeared on LatestLY on Apr 02, 2020 01:35 PM IST. For more news and updates on politics, world, sports, entertainment and lifestyle, log on to our website latestly.com).