Is This The World's Biggest Burmese Python? Meet 18-Foot-Long Pet Snake Hexxie From England Who Lives With Another Serpent and a Dog (Watch Video)

Hexxie, an 18-foot-long snake from Tewkesbury, Gloucestershire lives is owned by Marcus Hobbs. A video of the large snake slithering into the house and the amount of effort it takes to handle him can be seen in this video. 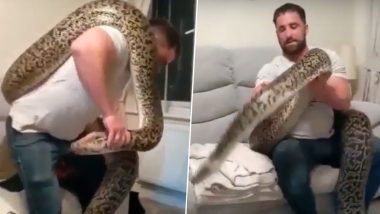 Most people are so scared of snakes or even the sight of these slithering reptiles. But the world's largest Burmese python is a pet snake in England! Hexxie, an 18-foot-long snake from Tewkesbury, Gloucestershire lives is owned by Marcus Hobbs. The snake lives in a three-bedroom home and feasts on rabbits, deer, calves, goats and pigs. But what's surprising is, Hexxie shares the home with a Husky dog and another smaller snake too. A video of the large snake slithering into the house and the amount of effort it takes to handle him can be seen in this video. Biggest Python Ever! Snake Hunters Catch 17-Foot Pregnant Female Carrying 73 Eggs From Florida Everglades, View Pic.

Marcus Hobbs bought this snake when it was just about eight inches and it's now grown into the world's biggest Burmese python in eight years. Although there are no official measurements taken of the snake recently, Hobbs is sure Hexxie has broken the record. To measure it would mean giving anaesthesia to her and he believes it is still growing. "I knew she would be big but she has shocked everybody by how much she has grown," he said in a report. Python Eats a Crocodile! Photographer Captures Incredible Pictures of the Attack in Queensland, Australia (View Pics).

The animal can get quite lethal if mishandled and could kill the family members too! But Hobbs has always been careful and does not let his sons, come around them. Hexxie lives with another serpent named Monty and the family also has a pet Husky dog. Over the years, Hexxie is also used to their human touch and would not cause as much danger. But if she is unhappy, she lets out a loud hiss and he knows.

Hobbs is a snake enthusiast if you haven't yet figured. He says he wants to help people to understand these reptiles and the misconceptions they have. "My family have always been into wildlife so I was always destined to get some sort of animal. But it's snakes that just fascinate me. I can watch them all day long," he said. Thankfully, the entire family is now used to having this huge reptile around and doesn't mind.

(The above story first appeared on LatestLY on Nov 12, 2019 04:45 PM IST. For more news and updates on politics, world, sports, entertainment and lifestyle, log on to our website latestly.com).