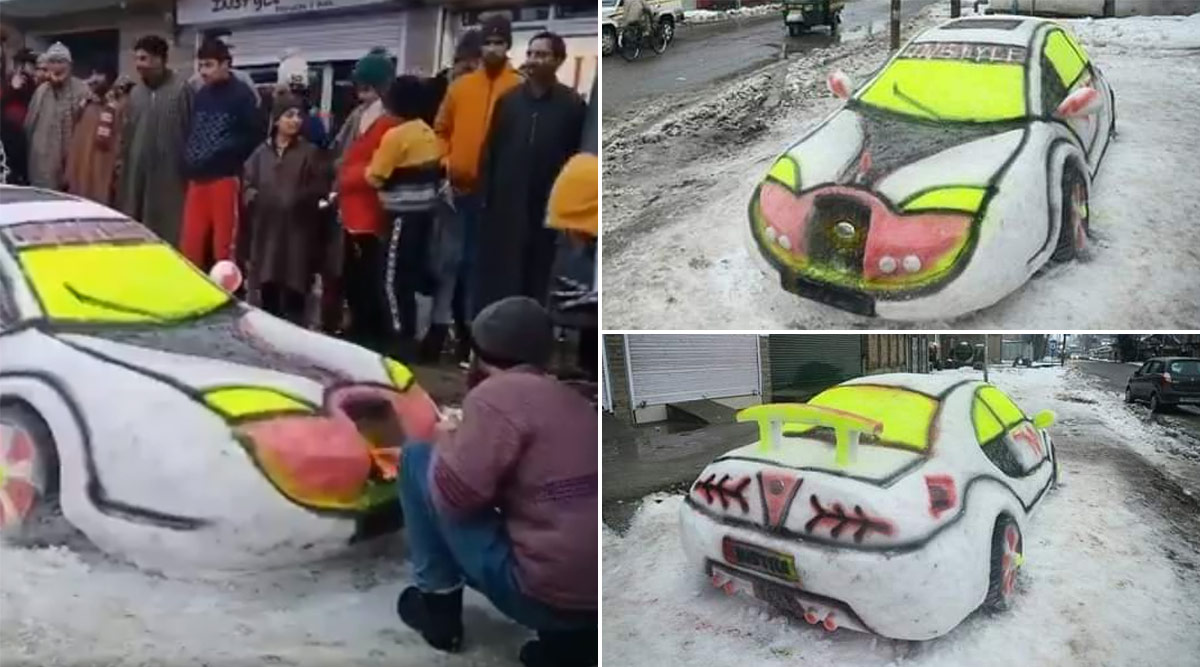 Kashmir is facing intense snowfall. As of the latest report, the Meteorological Department said that the Kashmir Valley and the Union Territory of Ladakh reeled under sub-zero night temperatures after the recent snowfall. Bracing the freezing temperatures, a Kashmiri boy, named Zubair Ahmed from Budgam district, made a supercool ‘snow car.’ It took him two days to finish it, but it is beautiful, even more from your regular four-wheel vehicles. The citizens were captured taking pictures and selfies, posing with the snow car. The icy sculpture is undoubtedly the talk of Kashmir and the rest of India, as people flood Twitter timeline with images of the vehicle. Snowfall Alert: IMD Forecasts Widespread Snow in J&K, Himachal Pradesh And Uttarakhand Over Next 24 Hours.

A video has been uploaded on Twitter, which shows Zubair, giving the final touch to his snow car. The rest of the people can be seen surrounding the car, waiting impatiently for the Kashmiri boy to finish. He used a lemon-yellow colour to highlight the glasses and lights and a lighter shade of red and black, to design the remaining texture. It is beautiful. Kashmir Receives Early Snowfall! See Gorgeous Pictures of the Valley Drenched in a Carpet of Snow.

Watch Video of the Snow Car in Making:

Snow Car Parked on the Roadside:

It is noted that Kashmiri boy from Budgam made Snow Car. People from different areas are taking selfies with snow car. Talent has no fear from crual fundamentalists😊#Kashmir #KashmiriPandits @pid_gov @OfficialDGISPR @narendramodi @KashmirCell @KashmirLobby pic.twitter.com/j3BCzsCa7Q

How you wish, you could drive the car! According to media reports, Zubair said that not just cars, he can also make helicopter, bike, car, train, tunnel and polar bear. Well, if the outcome of the icy vehicle could be this breathtaking, we can at least speculate, the result of any of his creation with snow.