Rare Olive Ridley sea turtles have been returning to the shores of India in mass numbers for nesting. According to the Odisha Wildlife Organisation ( OWO), nearly 50 per cent of the world population of these rare turtles arrive at Odisha’s coast for nesting. 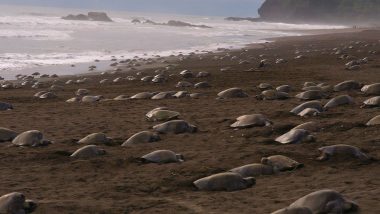 As the country is put under a 21-day coronavirus lockdown period, nature has started blooming. Animals were seen roaming freely on roads not just in India, but countries across the globe. From civet, dolphins, swans, deer, bison, a number of animals and birds were seen freely walking near human habitation. Adding to the list is Olive Ridleys which were seen at  Gahirmatha Beach and Rushikulya Rookery in Odisha. According to reports, lakhs of rare Olive Ridley sea turtles have been returning to the shores of India in mass numbers for nesting.

Parveen Kaswan, IFS took to Twitter shared a video of the turtles at Odisha beach. He tweeted that about eight lakh turtles arrived on Garhimatha and Rushikulya beaches. They have laid around 6 crore eggs. Berhampur Divisional Forest Officer (DFO), Amlan Nayak, told The Hindu, on March 22 at around 2 am, 2,000 female Olive Ridleys started coming out of the sea to the beach.

Thousands of olive ridley turtles nesting on the beaches of Odisha.

Their normal predators (humans) are in quarantine.

This season, their numbers will explode in the oceans.

There is a silver lining in this dark cloud after all. pic.twitter.com/l0DMLbGp4l

According to the Odisha Wildlife Organisation ( OWO), nearly 50 per cent of the world population of these rare turtles arrive at Odisha’s coast for nesting. These rare sea turtles are renowned for their mass nesting and come to Indian shores and Odisha’s coast every nesting season; the areas are their largest nesting site in the region.

According to the Forest Department, over 2,78,502 mother turtles were part of the day-time nesting activity. Over 72,142 Olive Ridleys have arrived at the beach to dig nests and lay eggs, since Tuesday morning. According to The Hindu report, each nest on an average, contains around 100 eggs. The incubation period is around 45 days.

(The above story first appeared on LatestLY on Mar 28, 2020 08:46 PM IST. For more news and updates on politics, world, sports, entertainment and lifestyle, log on to our website latestly.com).