Civet in Kerala to Dolphins And Swans in Italy, Watch Videos of Animals And Birds Roaming Freely During Coronavirus Lockdown 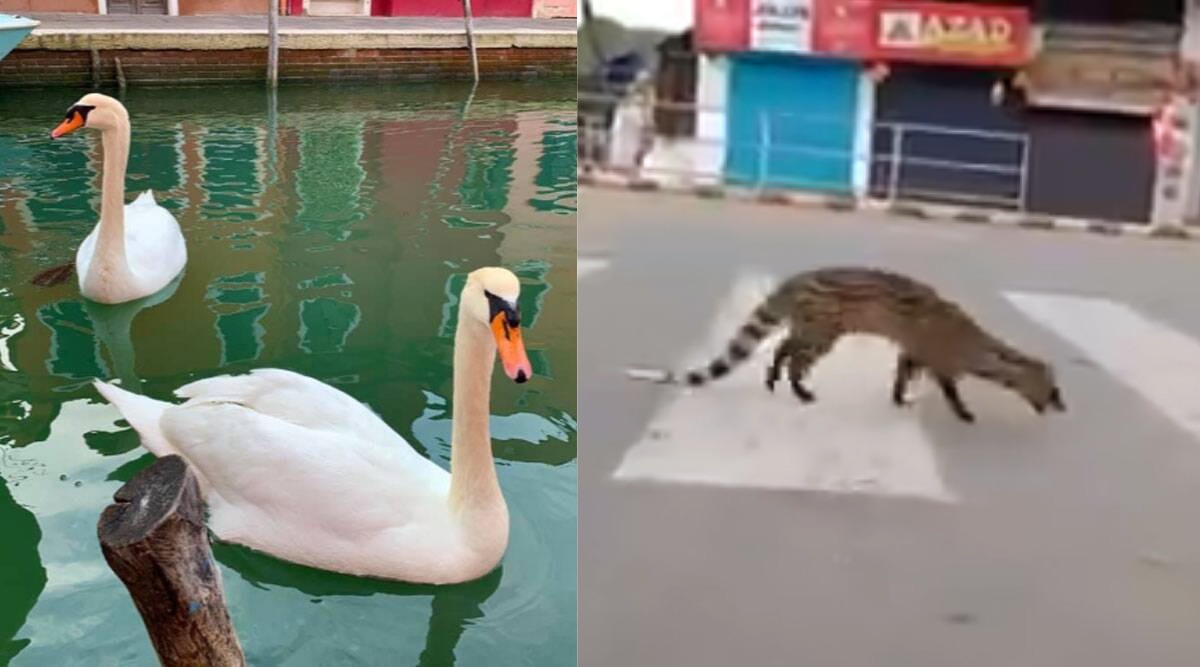 As countries have announced lockdown due to coronavirus, normal lives in cities have come to a halt. With people being confined to their homes, streets pose a deserted look. Shops, school and businesses have been closed in a  bid to curb the virus. And empty streets have been attracting wild animals. Those which are rarely spotted have started doing rounds near human settlements. Civet was spotted walking on an empty road in Kerala. Birds and water animals like dolphins, penguins, swans, turtles have also made appearances at multiple places across countries. Here, we bring to you three such instances were animal and birds are seen roaming freely on empty streets.

The absence of tourists has brought fish and swans to the waters of Venice. Videos of crystal clear water flowing in canals with groups of fish came as a surprise even to the residents. At many other places also animals of the wild were seen roaming freely on the streets.

After a week of lockdown, the Canals in Venice are now clear and full of fish pic.twitter.com/gslMCGTYF4

An amazing sight as Italian residents in #Sardinia, #Italy, have been witnessing #dolphins who have come back as a result of the #Coronavirus lockdown. It is amazing to witness Mother Earth healing herself once again! 🙏❤️🐬

Dolphins were spotted swimming freely in waters. While some reports say they were seen in Venice's canals, others believe the video was taken in Sardinia, an island in the Mediterranean Sea.

since there’s no boat’s traffic in venice’s canals, white swans came back 😭 this is precious pic.twitter.com/xJOFKL8Dal

Reportedly, swans were spotted in some part of Italy's waterways. While they are a regular in the region, reduced boat traffic has increased their appearances in the canals. Although viral tweets claim that the swans have returned to the canals of Venice, the swans are said to frequent the canals of Burano, an island in the greater Venice metropolitan area.

A Small Indian #Civet otherwise a nocturnal animal is freely walking during daytime at Meppayur Town, Kozhikode, Kerala, India. They are natural to this place. Just that less traffic makes them walk freely now. This one is following Zebra crossing also. VC Unknown. pic.twitter.com/BZO3Bb4TJl

The 14-second video shows a civet walking on the zebra crossing of an empty road during daytime in the Meppayur Town, Kozhikode, Kerala. The civet can be seen walking slowly across the road, which is otherwise a busy street.

Around eight lakh turtles arrived at Odisha beaches including Garhimatha and Rushikulya after the lockdown was announced. The turtles have laid around six crore eggs on the beaches.

Dolphins Off Mumbai Coast in India:

The air in Mumbai is so nice, light and fresh ..!!! I can't believe it 😃... and it seems dolphins were sighted just off the shore near Breach Candy club ..!!! This shutdown of cities is not so bad after all #CoronavirusPandemic pic.twitter.com/t94vhFyPRy

Videos of dolphins swimming near Mumbai seashore had gone viral on social media recently. The rare sightings were attributed to the lack of fishing activity due to the coronavirus situation. After Dolphins Spotted at Mumbai's Marine Drive, People Share Fake Funny Pics and Videos of The Aquatic Mammals Seen in Thane and Powai Lakes.

Penguins in Chicago, the US:

After Chicago's Shedd Aquarium was closed due to coronavirus outbreak, a group of penguins visited the place. Videos of the birds freely moving across the place have gone viral on the internet. They were given guided tours of the aquarium where they live after it was closed on March 13.

Reduced number of humans have resulted in animals roaming on their territory freely. Decreased in human activity across the globe has reduced smog in various parts of the world. Meanwhile, Coronavirus related death continue to rise across countries.