Lockdown 3 in the UK sparked funny memes and jokes on social media. ‘Not again,’ is the most common reactions. With schools, colleges and universities to move to remote learning, students flood Twitter with hilarious reactions you cannot miss. 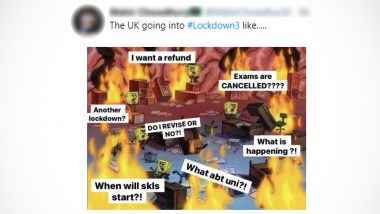 The coronavirus pandemic is not going to end anytime soon. The situation is gruesome, and the new strain of COVID-19 increases the ongoing strain. But people around the world are finding their own way to keep the situation less stressful with the help of memes and jokes. UK’s Prime Minister Boris Johnson announced that England is to enter its third national lockdown. The government is instructing everyone to ‘stay at home,’ and that all schools will close under the new restrictions. As expected, Lockdown 3 in the UK sparked funny memes and jokes on social media. ‘Not again,’ is the most common reactions. With schools, colleges and some universities to move to remote learning, students flood Twitter with hilarious reactions you cannot miss.

Britain has been taking strict measures to curb the spread. Earlier too, when Prime Minister Boris Johnson announced restrictions during the holidays, it sparked hilarious reactions on Twitter. So, when the UK PM announced that it would be in strict lockdown because of the rocketing infections, responses to the latest measure was quite anticipated. According to the new rules, all primary and secondary schools will be closed until at least mid-February. GCSE and A-level exams are cancelled. Everyone living in London has been directed to stay at homes, while non-essential retailers will be shut. The new restrictions state that the institutions will remain open for vulnerable children and the children of critical workers. Students who are undertaking training and study for certain courses should return to face to face learning as planned.

As the country entered another phase of lockdown, people flood social media with funny memes and jokes, trying to keep the situation a little less stressful. With schools and colleges being shut and moved to remote learning, students had a lot of hilarious reactions.

Every uni student just waiting to find out what’s going to happen with us #borishasfailedtheuk #university #Lockdown3 pic.twitter.com/Dj6FufXgd8

How I will be spending #Lockdown3 pic.twitter.com/JWzZspzzlt

My 18 year olds uni fees, 9 grand for an online course, to sit in a bedroom ...oooh wait 5 grand for that bedroom that she cannot now travel too and sit in !! #university #Lockdown3 pic.twitter.com/FGQJ77CMtj

Me thinking about going to a uni I’ve never even visited with grades I haven’t even taken exams for to do a course idek anything about #Lockdown3 #alevels2021 pic.twitter.com/mPkBkg3jWz

The return of many secondary school students and primary pupils has been put off with a switch to online learning. The new restrictions came after government figures revealed the UK had reached another record daily high of reportedly 58,784 new COVID-19 cases. The lockdown is expected to remain in force until the middle of February, 2021.

(The above story first appeared on LatestLY on Jan 05, 2021 10:13 AM IST. For more news and updates on politics, world, sports, entertainment and lifestyle, log on to our website latestly.com).