Sir Ludwig Guttmann Birth Anniversary: Here Are 5 Interesting Facts About The Founder of Paralympic Movement Honoured With a Google Doodle 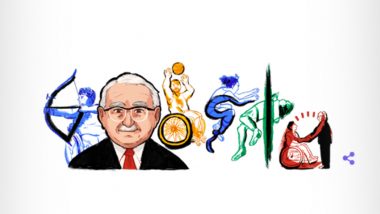 Today, Google honoured a man named Ludwig Guttmann with a doodle created by a guest artist from Baltimore -Ashanti Fortson. The drawing depicted Guttmann - who is also known as the Father of Paralympic Games - looking affable in the middle as doodles of paralympic games swirled around him. The homage through the doodle was bestowed to commemorate the 122nd birth anniversary of the man with an endearing nickname "Poppa." Born in Tost, Germany on July 3 1899, the Jewish, German-British neurologist history is deeply entrenched in the Nazi movement in Germany. That's merely one interesting anecdote about the founder of the Paralympic Movement. Here are five amazing facts in celebration of Guttmann's birthday.

1. After receiving his M.D. in 1924, Professor Ludwig was deeply invested in his research on spinal cord injuries and performed several neurosurgeries. His dedication to this particular field,  catapulted him to the stature of one of the best neurosurgeons in Germany by his early thirties.

2. During the height of Nazism in Germany, as a Jewish descent, he was prohibited from performing surgeries in 1933

3. When the Germans began rounding up the jews for concentration camps, He escaped from Germany and found refuge in England in 1939.

4. Guttmann resumed and advanced his research in paraplegia in England.  As the director of the National Spinal Injuries Center at Stoke Mandeville Hospital, he began taking novel approaches in the field that began to show excellent results in 1944. He started the“Olympics for the Disabled,” that involved games like archery competition that demonstrated strength despite their disabilities.

Due to Guttmann's dedication and diligence in the service of Paraplegics, today, Paralympic athletes' skills and achievements have no bounds. Paralympic Games are still a widely celebrated event in England and drives scores of athletes and audiences to the arena.

(The above story first appeared on LatestLY on Jul 03, 2021 10:19 AM IST. For more news and updates on politics, world, sports, entertainment and lifestyle, log on to our website latestly.com).