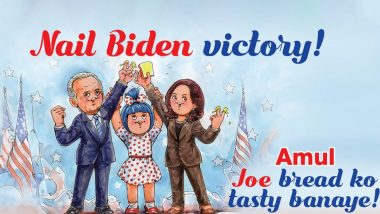 The world watched the neck and neck battle between the two political parties—the Democratic and the Republican. Be it the significant number of voters’ turnout as compared to the previous elections, or long-wait for Nevada to declare the state’s projected winner and everything else about the US Presidential Elections 2020 hooked the world. With US President-elect Joe Biden & US Vice President-elect Kamala Harris winning the election this year, people from across the countries shared their reactions on social media and so did Amul. India’s dairy brand congratulated the duo in its quintessential ‘utterly butterly’ topical ad, and it is as quirky as always. ‘Nail Biden Victory!’ Amul’s latest topical ad celebrates the US Presidential Election 2020 results, and its graphic represents Joe Biden and Kamala Harris.

Amul is always active on social media, and it often tries to create its topical ads depending on the ongoing situations around the world, which is why it is so significant among netizens. When Kamala Harris was selected as Biden’s running mate, Amul created an adorable doodle at the time to congratulate her. Even the US Presidential debate inspired the Indian Dairy brand to come with an amazing doodle. So, Biden and Harris were declared as the projected winner of the election; it was obvious for Amul to participate in USA’s victory with its quirky doodle.

Democratic candidate Joe Biden was declared the winner in the US Presidential Election 2020, as per projections of numerous media networks almost four days after the polling was closed. He will be the 46th President of the country. At the same time, Kamala Harris is the first woman US vice President-elect, first Black and also first South Asian, representing a new face of political power in the USA.

(The above story first appeared on LatestLY on Nov 09, 2020 09:10 AM IST. For more news and updates on politics, world, sports, entertainment and lifestyle, log on to our website latestly.com).