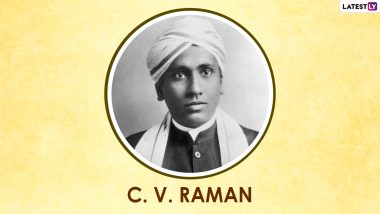 Chandrasekhara Venkata Raman, famously known as Sir CV Raman, was an Indian physicist and popular for his work in the field of light scattering. It was on February 28, 1928, when the professor discovered the Raman Effect that went ahead to win a Nobel Prize in Physics in 1930. To honour his finding, every year, on February 28, National Science Day is observed. As we mark the day, people have taken to social media remembering Sir CV Raman. National Science Day 2021 inspiring quotes, messages, and Sir CV images trend on Twitter with netizens highlighting the great physicist's achievements and stressing on the importance of scientific progress in our daily life.

With his student, KS Krishnan, Professor CV Raman discovered that when light traverses a transparent material, some of the deflected light changes wavelength and amplitude. This phenomenon was a new type of scattering of light and was subsequently termed the Raman Effect. He became the first Asian person to receive a Nobel Prize in any branch of science. Raman was precious to scientific development, and every year, on the anniversary of the Raman Effect, people honour him.

The theme for National Science Day 2021 is “Future of STI: Impact on Education Skills and Work.” The celebration of the day includes public speeches, radio, TV, science movies, science exhibitions based on themes and concepts, debates, quiz competitions, lectures, science model exhibitions and more. Because of the pandemic, major gatherings are not being held, and individuals took to social media to pay their respect to one of the greatest scientific discovery by Sir CV Raman.

On this day in 1928 Dr. CV Raman made the famous discovery of Raman effect.

The day is rightly celebrated as #nationalscienceday.

Prof CV Raman With His Students

Raman effect, change in the wavelength of light that occurs when a light beam is deflected by molecules.

Remembering and feeling proud of Indian pride the first Noble laureate Sir CV Raman on a historical day of science world in the field of Physics by discovering RAMAN EFFECT on this day in1928...#NationalScienceDay #nationalscienceday2021 pic.twitter.com/YBjzwWg6dR

Not many people know that CV Raman was the first Indian to become the Director of IISc Bangalore, India.

His contributions to the field of science will always be remembered. On the day, it is essential to display all the activities, efforts and achievements in science for human welfare.

(The above story first appeared on LatestLY on Feb 28, 2021 10:42 AM IST. For more news and updates on politics, world, sports, entertainment and lifestyle, log on to our website latestly.com).