He will be the first guest on the show Jab We Met. Looks like, Sharma had too much fun in the shoot and was seen dancing on Amitabh Bachchan's song Apni Toh Jaise Taise from Lawaaris. 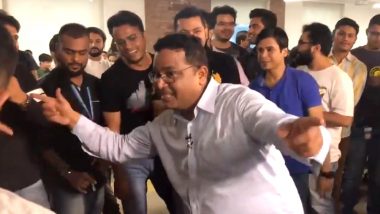 The founder of Paytm, an Indian e-commerce payment system and digital wallet company Vijay Shekhar Sharma is the youngest Indian billionaire. The 39-year-old has his name on the Forbes Billionaire 2018 list, making him the only Indian billionaire in the under-40 league. Becoming a billionaire, managing such a huge business worth billions is not an easy task, sure has a lot of pressure. But Vijay Shekhar Sharma was recently caught foot-tapping and dancing to a Bollywood number. He was a part of an interview show for news channel, India Today. He will be the first guest on the show Jab We Met. Looks like, Sharma had too much fun in the shoot and was seen dancing on Amitabh Bachchan's song Apni Toh Jaise Taise from Lawaaris. Beware of Fake Paytm & Paytm Mall Offers, Cashbacks And Voucher Deals: Vijay Shekhar Sharma Tells How to Find Genuine Deals.

Sharma founded the mobile wallet company in the year 2011 and soon it was the fastest growing one, making him a billionaire, with a fortune of USD 1.7 billion. Along with the mobile wallet system, he also started the Paytm Mall and Paytm Payments Bank, which saw an equal response. Sharma got Warren Buffet's company Berkshire Hathaway to invest in his firm, One97 Communications. Sharma's journey to success is inspiring, which makes him an interesting guest for an interview show and now we have seen his fun side too in a video clip.

Haven’t had so much fun during a shoot in a very long while. Just finished recording first episode of Jab We Met, an all new, immersive interview show. Debuts tomorrow night at 9:30 pm on @IndiaToday First guest the indomitable @vijayshekhar of @Paytm pic.twitter.com/8yPRHAoAfz

Sharma recently faced flak on social media for his donations to the Kerala Relief Fund. While Paytm made it possible to donate directly to the relief through their app, Sharma posted a picture that he had donated Rs 10,000. He thus became a target online for making such a low contribution despite his earning in billions. But it was revealed later that it was due to a limit of transfer of Rs 10,000 and he had contributed up to Rs 3 crores.

(The above story first appeared on LatestLY on Sep 07, 2018 06:02 PM IST. For more news and updates on politics, world, sports, entertainment and lifestyle, log on to our website latestly.com).