Questioning his generosity, users on micro-blogging site said they have contributed more than Sharma despite an income which is a miniscule fraction of his wealth and assets. 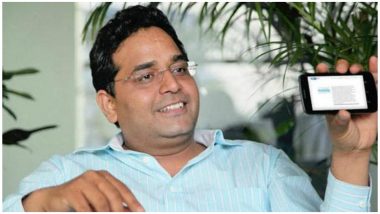 Questioning his generosity, users on micro-blogging site said they have contributed more than Sharma despite an income which is a miniscule fraction of his wealth and assets.

The tweet of his donation receipt was deleted by Sharma after being trolled/ Here's the screenshot:

Paytm founder @vijayshekhar Sharma, The youngest Indian billionaire with net worth of $1.7 billion did a self promotion by posting a screenshot of him donating a huge amount Rs.10000 via his @Paytm app towards #KeralaFloods. Deleted it later. pic.twitter.com/ML7GHh1Y8i

Here are other prominent reactions:

Shame ,did u donate only 10000? The screenshot is getting viral on whatsapp n ur credibility at stake ...

Proportionately, I should have donated 2 paisa. Thank god I am not a billionaire.

Some Twitter users, however, defended Sharma saying the maximum amount which could be transacted through PayTM at once is Rs 10,000.

Although the PayTM chief has drawn flak, his mobile wallet firm has collected more than Rs 3 crore in last 48 hours for the Kerala relief fund.

The civil society in the flood-ravaged state, along with the government, has appealed people from all parts of the nation to make maximum donations. Here are the details for making a donation to the Chief Minister's Disaster Relief Fund:

Kerala is facing its worst flood in 100 years. 80 dams opened, 324 lives lost and 223139 people are in about 1500+ relief camps. Your help can rebuild the lives of the affected. Donate to https://t.co/FjYFEdOsyl #StandWithKerala.

As part of the rehabilitation programme, the state government will disburse Rs 4 lakh each to the kin of deceased, along with Rs 10 lakh to those whose houses have been washed away in the floods. Rs 3,800 per person will also be provided at the earliest to people lodged at the relief camps.

(The above story first appeared on LatestLY on Aug 18, 2018 06:24 PM IST. For more news and updates on politics, world, sports, entertainment and lifestyle, log on to our website latestly.com).