Pervert Man Sends Picture of His Penis to Transgender Woman, Her Reply With Photo of Her 'Bigger' Genitals is Winning The Internet (Check Viral Tweet)

A pervert sent a picture of his penis to a woman he met online. The 20-year-old transgender from Glasgow sent him a picture of her own penis and he got shocked! Faye Kinely shared the exchange on her Twitter profile and the tweet is now going viral. 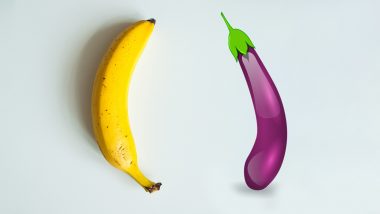 A pervert who sent a picture of his penis to a woman he met online, got a bitter taste of his own medicine when she responded back, with a picture of her bigger penis! A 20-year-old transgender from Glasgow named Faye Kinely shared the exchange on her Twitter profile and the tweet is now going viral. Kinely was born has a male but is a proud transgender. Sexual harassment cases online or receiving unsolicited private pictures has unfortunately become quite common today. But Faye Kinely decided to give it back to this pervert and he ended up blocking her out of the utter shock of what he'd just seen! Money for Nudes! A Woman Makes Good Use of It After a Perv Twitterati Paid Her £30; Netizens Loves Her Savage Response.

Faye Kinley shared the exchange of conversations between the two on her Twitter account and covered the private parts with emojis. The man apparently got her number from Facebook and decided to send a snap of his own genitals to her. Along with the picture he wrote, "Hey girl you so sexy." Quick thinking Faye, decided to reply in his manner, and she sent him a picture of her own penis. The man on the other side was so shocked and mentioned that he is blocking her right away. The hilarious tweet has got even funnier responses on Twitter.

This random guy somehow got my number off here and sent me a dick pic and I guess he didn’t appreciate it when I sent a picture of mine back 🤷🏼‍♀️ worked like a charm pic.twitter.com/uzdluTH4hb

The tweet has got over 60,000 plus retweets and 2 lakh plus likes. More people agreed to the fact that she did the right thing by replying to him in the same vein.

Men really flip out when you treat them the way they treat you.

LOL he's shook. Got his transphobia and homophobia vying for control. pic.twitter.com/qVnHpP3Px7

Blown Up to Next Level!

I’m crying at how much tbis blew up Faye

I love when he tells you to “delete this conversation.” Like he didn’t barge into your space with his grundle & spindle out in the first place.

"Why would you send me that" he yells, as the irony void consumes him whole.

It is indeed funny how the man told the woman to delete the conversation and block his number instead. His reply is a stark example of irony and people are appreciative of Faye's courage to put it out there.

(The above story first appeared on LatestLY on Sep 28, 2019 12:56 PM IST. For more news and updates on politics, world, sports, entertainment and lifestyle, log on to our website latestly.com).