The schoolgirl was surprised to see her grandmother in an old age home during her visit, as a part of her school tour. 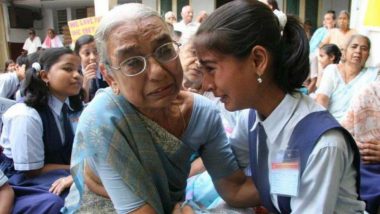 Every picture tells a story, but some pull us in more than the rest. As they say, “A picture is worth a thousand words,” – the motto of all photojournalists. They make us wonder what heart-breaking or amusing things just happened or ponder what is about to occur next. This year, on World Photography Day which held on August 19, photographers, aspirants and netizens have shared their best moment on the social media platform. But there was one which saddened everyone. A viral picture of a crying old lady along with a schoolgirl. If we go by several posts, the image is of a girl who was surprised to see her grandmother in an old age home during her visit, as a part of her school tour. Because her parents told her that her granny was living with relatives. During the unexpected reunion, both busted into tears; the moment was captured. As accusations towards the family continued, BBC had unfolded the real story behind the viral photo by going live on Facebook. The video is available to watch. History & Significance Of World Photography Day Celebrating The Art of Taking Pictures.

Whenever we hear about old age home, automatically it comes to our mind that the seniors are being abandoned by their families. The viral picture was emotional enough to make everyone believe the same story. However, it is not! According to BBC, the image was initially photographed by Kalpit S Bhachech in 2007 at Gujarat. This picture at the time too became the talk of the town as to why the truth was kept from the young girl. Ten years later, the pic went viral. The only reason, the photo appeared on social media in 2018 was because ahead of World Photography Day, BBC Gujarati had asked journalists from across the state to share the best photo stories of their career. That is how it is all over on all the social platforms.

The picture indeed is a grandmother-granddaughter duo, but the story is not true. BBC Hindi reached out to the family to end the speculations and conducted an interview with them, who clarified the story. Know About The First Selfie Ever Taken and Origin of The Term.

Watch the video of the interview.

The schoolgirl in the picture, identified as Bhakti told the news channel that her grandmother was staying there by choice. She further added, that the outburst was only because of emotional nature and she did not expect her granny to see at that old age home. Bhakti knew that her grandmother was staying at an old age home but not sure which one. On the same note, the grandmother had said that she enjoys staying there. She explained that she decided to stay at the ashram on her own will so that she can also spend some time as a devotee. The place is peaceful to her, and she even visits her son, daughter-in-law and the grandchild on a regular basis. Her family did not abandon her.

(The above story first appeared on LatestLY on Aug 22, 2018 08:33 PM IST. For more news and updates on politics, world, sports, entertainment and lifestyle, log on to our website latestly.com).