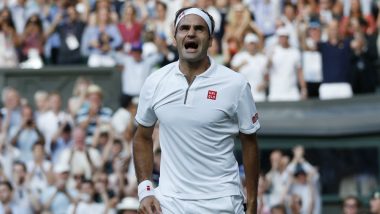 Swiss great Roger Federer, ahead of the Wimbledon 2019 final, is facing a challenge by Indian fans on Twitter, for apparently no fault of his. The tennis maestro is being compared to Bollywood actor Arbaaz Khan for the uncanny resemblance that he shares with the Bollywood actor. Many funny memes are being circulated on Twitter. Roger Federer vs Rafael Nadal Semi-Final: Indian Origin Boy Engrossed in His Book During Wimbledon 2019 Clash of Tennis Greats Inspires Funny Memes on Twitter.

Eight-time Wimbledon champion Roger Federer will play his 12th final at the All England Club on Sunday against the World No 1 Novak Djokovic. But instead of Djokovic, it is Arbaaz Khan memes that Federer and his fans have to deal with before the clash.

Did you know about this 😂😂😂 pic.twitter.com/ezktFJgMnw

My brother- a huge huge Roger Federer fan was so ecstatic with Arbaaz Khan entering Bollywood. He said- don’t know what future holds for Arbaaz but atleast we will see Federer on television everyday. https://t.co/7osx3BfyDE

Lot of Indian Fans for ROGER FEDERER. All becoz he is twin brother of @arbaazSkhan.#Wimbledon#Wimbledon#federervsnadal

Roger Federer and Novak Djokovic will lock horns at the 2019 Wimbledon final on Sunday. The Swiss great aced the challenge thrown by arch rival Rafael Nadal in the semi-final of Wimbledon 2019 on Friday and will face World No 1 Novak Djokovic in the final for a record ninth win at SW19. On the other hand, Djokovic will try and win his 16th Grand Slam and fifth Wimbledon trophy.

(The above story first appeared on LatestLY on Jul 14, 2019 04:42 PM IST. For more news and updates on politics, world, sports, entertainment and lifestyle, log on to our website latestly.com).