A boy of Indian origin spotted reading a book during the Federer vs Nadal Wimbledon 2019 semi-final match is winning hearts on Twitter as users on social media cannot get their heads around the fact as to how could someone and especially a young boy avoid the charms of a 'Fedal' (Federer vs Nadal) clash and be engrossed in a book. 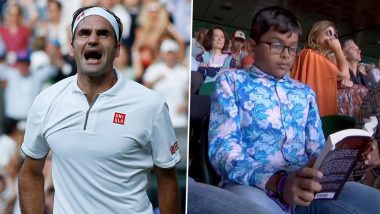 While Roger Federer and Rafael Nadal gave the world another reason to marvel at their talents, a boy of Indian origin in blue floral shirt spotted reading a book during the clash of the great tennis rivals in Wimbledon 2019 semi-final match is winning hearts on Twitter as well as inspiring memes galore on social media. Twitter users could not get their heads around the fact as to how could someone and especially a young boy avoid the charms of a "Fedal" (Federer vs Nadal) clash and be engrossed in a book as funny memes filled the social media platform. Roger Federer Beats Rafael Nadal to Reach 12th Wimbledon Final, Swiss Great to Face Novak Djokovic For Record 9th Wimbledon Trophy.

In fact, even the commentators were taken aback at the sight of the boy in blue full sleeves floral shirt absorbed in the book. One of the commentators said jokingly that, "Close that book" and remarked how it was not the time to read a book. Roger Federer Beats Rafael Nadal 7-6(7-3), 1-6, 6-3, 6-4, Will Face Novak Djokovic in the Final For 9th Wimbledon Trophy.

Can't believe commentators were giving a kid in the audience flack for reading a book at #Wimbledon - least it wasn't an ipad - kudos to any kid picking up a book these days......#federervsnadal pic.twitter.com/JwM4cnrMNt

Here's the Moment Captured in Video

2 of if not the greatest players ever and the kid is reading a damn book smh #FedererNadal #Wimbledon pic.twitter.com/0FFosabdFl

And Here Begins the Funny Replies

It's Federer vs Nadal and he's enjoying his favourite book. This is the level of disassociation I wish to have. pic.twitter.com/vPJWUDMkur

This is the real Sharma ji ka ladka you were told to be scared of..

Such kids were the prime reason for flying chappals at me..

The "Spelling Bee" Association Was Expected

"How Could He?" Questioned Fans

How can you be reading a book at a Federer vs Nadal match? pic.twitter.com/vy27OyMBPd

Users Wondering Which Book Was He Reading?

What is he reading? He doesn't even lose his concentration when #fedal play. Must be the most interesting book on planet. #Federer #Nadal #Wimbledon. pic.twitter.com/ahY2wobvZ7

Some Tweets Were Really Harsh on the Kid

Imagine pouring over ten years of your life into raising a child, only to see them pull out a book during Federer vs Nadal.

The Cost of the Ticket Also Came Into Play Here

This kid is just casually reading a book at a classic game while two of the greatest tennis players battle each other... Wow!!! That book must be extra interesting!! 🤔🤔

Some Wanted to Take His Seat

What was that boy doing! 🤣 Reading a book whilst the two greatest tennis players Nadal and Federer are playing! I’ll take your seat then!

This User Claims to Have Found Out the Book

Whether one agrees with the boy's decision to read a book during the clash  or not, one has to acknowledge the fact that the boy managed to get a mention during and in the same breath as Roger Federer and Rafael Nadal match, which is an achievement in itself.

Swiss great Roger Federer beat arch rival Rafael Nadal in the semi-final of Wimbledon 2019 in four sets as he beat the Spaniard 7-6(7-3), 1-6, 6-3, 6-4. He will now face defending champion and World No 1 Novak Djokovic in the final of Wimbledon 2019. This will be Federer's 12th appearance in a Wimbledon final match.

(The above story first appeared on LatestLY on Jul 13, 2019 03:29 PM IST. For more news and updates on politics, world, sports, entertainment and lifestyle, log on to our website latestly.com).