The farmer fell in between the pigs and was eaten by the animals. 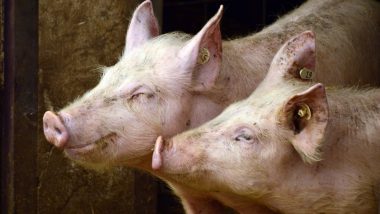 In a horrific incident, a Russian woman was eaten alive by pigs after she collapsed in their pen. The 56-year-old farmer is believed to have suffered an epileptic seizure while feeding the animals. She collapsed in between the pigs and was eaten by the animals. There were several bites on her face, shoulders, ears and lost a tremendous amount of blood. The incident happened in a village in  Malopurginsky district of Udmurtia, western Russia. Her husband found her lying died on their farm on February 1.

As per reports, he had slept early as he was unwell and came to the farm in the morning looking for his wife. It states that while she laid motionless on the ground, the pigs were "completely eating" her face and other body parts. Detectives said that they had not come across such a "shocking case" in recent years. An investigation has been initiated into the incident. It is not known how many pigs were in the sty. Two Rottweiler Dogs Kill Elderly Woman in Kerala.

A spokesman for the regional Investigative Committee was quoted as saying, "The opinion of forensic experts has been requested in this case." They are trying to "establish all the circumstances and reasons for what had happened". 4-Year-Old Indian Boy Dies on Flight As He Develops Epileptic Seizures.

In a similar incident, an Oregon farmer was eaten by his pigs in 2012. A family member had found the dentures and pieces of his the 69-year-old lying near the sty. While domestic pigs are not known to be aggressive, there are some which are dangerous. Typically these pigs weigh between 113 kg and 136 kg; however breeding family pigs were weighed more than 181 kg.

(The above story first appeared on LatestLY on Feb 09, 2019 09:17 AM IST. For more news and updates on politics, world, sports, entertainment and lifestyle, log on to our website latestly.com).