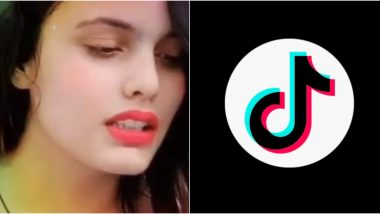 Sandhya Chauhan, another young TikToker has died by suicide. Sandhya's death comes after Siya Kakkar, a 16-year-old TikTok star took her own life last month. Sandhya lived with her family in Delhi's Green Park. Reportedly, she was a student at the Delhi University and was upset about the Indian government banning the Chinese-based app, TikTok. The exact cause of her death is not known and police are investigating the matter. Cops are now checking her phone for clues to know what led her to take her own life.

According to reports, her mother was alone at home when she took her own life. Her cousin thereafter reported the incident to the police. Modipuram outpost in-charge Vikas Chauhan reached her home and broke the door and rushed her to SDS Global Hospital where she was pronounced dead. The body was thereafter sent for postmortem. Suicide Prevention Helplines in India: Numbers to Dial in Case of Suicidal Thoughts, Depression, Distressed State of Mind.

While the exact cause of her death is not known, police suspect that it could be due to some issues at home. No suicide note was found in her room. Her family said that for the past two months, Sandhya was in depression but they do not know the reason.

The death of TikTok stars, all by suicide, one after another is indeed shocking. On June 14, popular Bollywood actor Sushant Singh Rajput had died by suicide at his Mumbai residence. His former manager had also taken her life a week before him. However, many say that the case of TikTok stars taking their own life is due to their career coming to a standstill after the Indian government banned Chinese apps in the country owing to growing India-China tensions at the border.

(The above story first appeared on LatestLY on Jul 05, 2020 02:10 PM IST. For more news and updates on politics, world, sports, entertainment and lifestyle, log on to our website latestly.com).