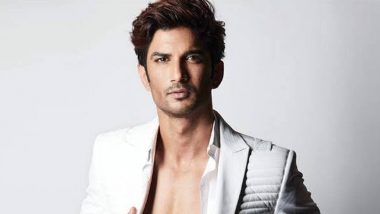 Sushant Singh Rajput has apparently committed suicide and the police officers have confirmed the same. Social media is currently buzzing with the news of the actor's sad demise and his fans are mourning the news of the tragic death. The Kai Po Che actor was found hanging at his Mumbai residence and the actual reason behind him taking such a harsh step is still unknown. Lockdown Diaries: Sushant Singh Rajput Reveals His ‘Meta Skills’ to Manage Time.

Sushant Singh Rajput's last release was Chhichhore with Shraddha Kapoor and the movie had enjoyed a great run at the box office. His upcoming release was Dil Bechara with Sanjana Sanghi and reports suggested it was heading straight to an OTT release. He was among the few TV actors who had successfully established their careers in Bollywood and was known as a rising talent. Sushant Singh Rajput Is a Fan of Computer Gaming and Making the Most of COVID-19 Lockdown by Learning Computer Programming.

The news of Sushant's demise comes in four days after the death of his former manager Disha Salian. While it was earlier assumed that she committed suicide, officials later confirmed it to be an accident.

(The above story first appeared on LatestLY on Jun 14, 2020 02:40 PM IST. For more news and updates on politics, world, sports, entertainment and lifestyle, log on to our website latestly.com).