Sleeping Alone at Night? These Instances of People Seeing 'Ghosts' in Their 'Haunted' Homes Will Make You Sleep With Your Lights ON! (Watch Spooky Videos) 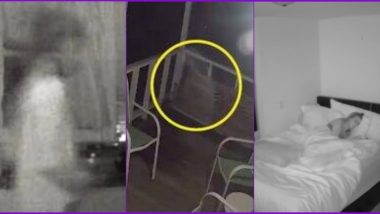 Do you sleep alone and have those creepy thoughts of someone else being there too? Well, then sorry, this may not really help. Because people around the world have encountered some spooky sightings into their homes. And they have caught their proofs on camera too. If you are keenly interested in ghost videos then this can definitely help. Paranormal activities often have its share of fans as a genre and many people search for ghost stories, real ghost encounters, ghost caught on cameras, horror stories, haunted home being the many common terms. Now, we have gathered some instances where people have seen ghosts in their homes and they might freak you out a bit, or maybe not? Ghosts of Gettysburg Caught on Camera? Video of Two Spooky Apparitions Spotted by Tourists Goes Viral; Know The Story of The Town's Haunted Past.

A Reddit user decided to film what happens in his home he steps out for work. He and his flatmate used to hear some door opening and shutting sounds. So they decided to film it and had a "motion detected" notification too.

Our motion camera finally picked up what my roommate kept telling me about (explanation in comments). from r/Ghosts

Last year, a mother from Atlanta believed her late son paid a visit to her. She spotted a shadow in their kitchen and believed he was here. She received a notification on her phone while she was watching TV about someone being in the kitchen. When she checked the image, she saw a a male figure just like her son.

A woman from Texas claimed last month that she was visited by the ghost of her father when she was going through some difficult time herself. She and her mom battling cancer were having a difficult conversation. When she went in her bedroom, she saw a ghostly spirit that sat in the chair in the front porch. She believes it was her father.

A couple from Michigan shared a video which showed a mysterious shadow on their nanny camera. The footage shows something moving in front of the child's crib. They even believe that the baby can see the ghost, but they are not able to see it. Moreover, they even saw scratches on their little one which they believe were done by this ghost.

A woman's camera caught a ghost entering her room and taking away her sheets! She freaked out and switched on the lights to see what is happening. The entire scenario is quiet scary and the video even spooked others out.

If the above ghostly videos scare you, then you may not want to switch off your lights tonight, or at least, a few nights from now on. Sweet dreams, or should we say, spooky ones?

(The above story first appeared on LatestLY on Sep 30, 2020 09:12 PM IST. For more news and updates on politics, world, sports, entertainment and lifestyle, log on to our website latestly.com).