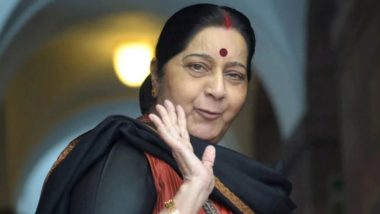 On this day, last year, Sushma Swaraj left for her heavenly abode. As a senior leader of the Bharatiya Janata Party, Swaraj served as the Minister of External Affairs of India in the first Narendra Modi government. She was the second woman to hold the office, after Indira Gandhi. She was also one of India's most-followed politicians on Twitter with over 13 million followers.

Sushma Swaraj was an Indian politician and a Supreme Court lawyer who was born on February 14, 1952, and died on August 6 in 2019. On the occasion of her first death anniversary, LatestLY takes a look at her five best tweets which won the internet. Sushma Swaraj 68th Birth Anniversary: Remembering Five Fiery Speeches of the Late BJP Veteran.

Her last tweet, just three hours before her death, praising PM Modi for the centre's move on Article 370 in Jammu and Kashmir.

Here's her last tweet, just a few hours before her death praising Narendra Modi for the abrogation of Article 370:

Here's her tweet to a man who sought her help and said he was "stuck on Mars", she gave a prompt witty response.  "Even if you are stuck on the Mars, Indian Embassy there will help you."

Even if you are stuck in Mars, Indian Embassy Will Help You:

Even if you are stuck on the Mars, Indian Embassy there will help you. https://t.co/Smg1oXKZXD

Here's her humorous reply to the man who said she wanted help in buying refrigerators.

Brother, I cannot help you in matters of a Refrigerator:

Brother I cannot help you in matters of a Refrigerator. I am very busy with human beings in distress. https://t.co/cpC5cWBPcz

Earlier this year, an Indian man based in Malaysia approached Sushma Swaraj on Twitter to seek help in sending a friend back home. His language was full of grammatical errors and he was trolled by many. This is when Swaraj came to his rescue and tweeted saying-"I have learnt to follow English of all accents and grammar'.

I have learnt to follow English of all accents:

There is no problem. After becoming Foreign Minister, I have learnt to follow English of all accents and grammar. https://t.co/2339A1Fea2

Here's her response to a man who said that she is more humorous than Rahul Gandhi.

Then I should stop being humourous:

Then I should stop being humorous. https://t.co/9wC3lsbo7Y

Swaraj was known for her Twitter humour and humane approach in solving crisis situations.  From shutting a troll who pronounced her dead much before her actual demise to telling another person that she was busy solving problems of human beings and cannot attend to his refrigerator, Sushma Swaraj was loved for her wit.

At the age of 67, Swaraj died last year after facing kidney-related ailments. The tragic demise shook the nation, as she was active in public life till days before her death.

(The above story first appeared on LatestLY on Aug 06, 2020 10:18 AM IST. For more news and updates on politics, world, sports, entertainment and lifestyle, log on to our website latestly.com).