The Simpsons Prediction About US Presidential Debate 2020 is Not What It Looks Like! Know Truth About 'Old Man Yells At Old Man' Viral Image and Tweets 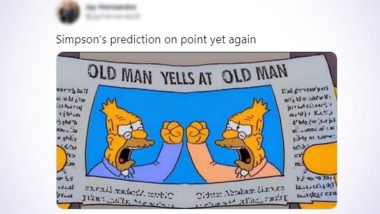 Republican President Donald Trump and Democratic nominee Joe Biden got on stage last night for the first round of 2020 United States Presidential Debates. The first one took place on September 29 and the high-stake debates saw a meltdown between Trump and Biden. The debates include political battles on various issues and the first one saw quiet a chaos. It was full of bitter taunts, personal remarks and the whole scenario gave rise to a series of memes and jokes on social media. While, that wasn't surprising, some people have found a reference from the popular animated show The Simpsons. A comical image that reads, "Old Man Yells At Old Man" is being widely shared online with people commenting that The Simpsons predicted the 2020 US Presidential Debates as well. But the show might have been right about other instances, but not this one. We tell you why. US Presidential Debate 2020: On COVID-19, Donald Trump Says Joe Biden's Only Plan is to 'Shut Down Whole Country'.

The Simpsons has always been a subject of interest among people, as it has "predicted" so many instances, more so in the year 2020. In fact, after every crisis-like situation, people have found a reference to the show. Be it the spread of Coronavirus or White House Lights Out episode. Now an image of a two characters yelling at each other with a caption that reads, "Old Man Yells At Old Man" has been shared online. Twitter says that is relevant for the recent debate and have praised the show for being so ahead of its time. But the image is likely a doctored image. The original image which was also a popular meme format read, "Old Man Yells at Cloud" with only one man in the picture.

There are a lot more similar tweets posted with the same image. In fact the phrase of "old man yells at old man" was also tweeted numerous times since yesterday. But when we searched for the original image, we came across a meme that shows only one person, and it reads, "Old man yells at clouds." This clip is from The Simpsons episode, in which there is clearly just one man. It looks like a false case similar to The Simpsons predicting Donald Trump's date which was linked to August 27 this year.

So the image that is being shared online is most likely a doctored photo which is being passed along to seem relevant for the situation. So, The Simpsons may have predicted a lot of things right, but the recent one is not among them. The photo is likely to come up in the next few debates as well, so be warned it is not a real image from the show.

(The above story first appeared on LatestLY on Sep 30, 2020 06:51 PM IST. For more news and updates on politics, world, sports, entertainment and lifestyle, log on to our website latestly.com).