Did The Simpsons Predict White House Lights Out? Viral Pics From the Animated Series Shock Netizens of Another Possible Prediction Amid Protests Over George Floyd’s Death

The lights of the White House were also switched off. Twitter users were quick to point out how the event matched with The Simpsons episode. Netizens wonder if the animated series predicted the White Lights out event too, as pictures from the episode show exact situation. 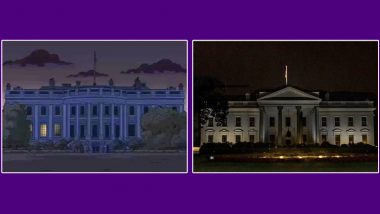 The Simpsons have an uncanny knack of predicting the future. Be it Ebola virus, coronavirus, Donald Trump’s US presidential win or now the White House lights out episode; the animated cartoon series has seemingly predicted world events, years before they happened. At present, citizens at the United States of America have come together on the streets, protesting against the killing of George Floyd, an African-American man from Minnesota. People were also protesting outside the White House. According to reports, Trump is believed to have spent around an hour in the bunker, which is designed for emergencies like terrorist attacks, after being escorted there by the secret service in the last weekend. The lights were also switched off. Twitter users were quick to point out how the event matched with The Simpsons episode. Netizens wonder if the animated series predicted the White Lights out event too, as pictures from the episode show exact situation. Did The Simpsons Predict Crude Oil Prices to Turn Negative? 6 Times When the American Animated Sitcom’s Predictions Came True.

The recent riots have set the US cities in flames. Citizens are voicing their opinion to the death of George Floyd, who was brutally killed by Minneapolis police officers during his arrest last week. With the hashtag, #BlackLivesMatter, people took to streets, protesting against the killing of Floyd and on systematic racism. While the nationwide protests are on, secret service agents reportedly rushed President Trump and his family to an underground bunker in the White House, in fear of possible terror attacks. The White House lights were soon shut off. Slamming the darkness that symbolises fear from the First Family, outraged netizens began to troll Trump as the #BunkerBoy. Who Was George Floyd? Why Was He Detained? Here's Why the Death of the 46-Year-Old African-American in Minneapolis Sparked Violent Protests in US.

Amid the tweets, came in pictures of The Simpsons episode that show how the lights of White House were shut too, and President Trump was seen hiding in a bunker. The episode is yet to be confirmed and so the year when it was released, but the apparent resemblance made netizens wonder if The Simpsons predicted the latest event as well.

the Simpsons did it again

Did The Simpsons Predict White House Lights Out?

The Simpsons predicted the lights out on the White House pic.twitter.com/xujo00Fte7

As we said, it was not immediately clear as to which episode from The Simpsons aired the White House lights off. Or if at all, the pics belong from the cartoon series. Whatever the case here is, the US is not in rest. The pandemic-hit country continued its protests, calling on leaders to listen and act to end the racial inequalities.

(The above story first appeared on LatestLY on Jun 02, 2020 12:44 PM IST. For more news and updates on politics, world, sports, entertainment and lifestyle, log on to our website latestly.com).