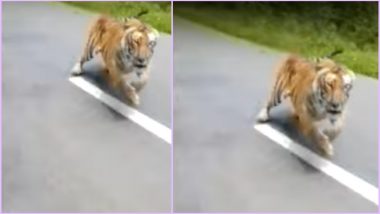 Videos of tigers chasing humans have often been captured and shared online. Such instances only scare the onlookers. A similar incident has been shared on social media that is scaring the netizens, with users commenting on how frightening it is in the wild. Reportedly shot in Muthanga Wildlife Sanctuary in Kerala’s Wayanad, the footage shows a tiger, noticing the two riders on a bike and giving them a brief frightening chase, before disappearing in the woods. The horrific video at the time of writing this, has received more than 4,000 shares and the count is still on. Duck Survives a Tiger Attack! This Viral Video Teaches Us How to Duck Problems Skilfully.

The footage is uploaded by the Forests and Wildlife Protection Society (FAWPS), on its Facebook page, with the caption, "A Tiger is seen chasing a bike in Muthanga Wildlife Safari in Wayanad in Kerala. Is this how the Tiger Parks are managed in India?" FAWPS is a non-governmental organisation that works for forest conservation and they provided very little information through the video. But it is surely enough, to raise your hair. World's Largest Cat, a Lion-Tiger Cross Breed Weighs 319 Kgs!

In the video, two men can be seen riding the bike on the empty road. Thankfully, the pillion spots the tiger, appearing from the woods, chasing them. The biker immediately increases his speed to make a good distance from the animal. A Hindustan Times report identified the people riding the bike as Forest Department officials, who were on patrol duty after they received information about a tiger sighting in the area.

(The above story first appeared on LatestLY on Jun 30, 2019 03:48 PM IST. For more news and updates on politics, world, sports, entertainment and lifestyle, log on to our website latestly.com).