He said that the Assam State Zoo would remain grateful for the efforts of Marketa Hersica and Roman Hersky from Zoo Zlin of the Czech Republic for providing the beautiful pair of the species and working against all odds even during the Covid pandemic to ensure their safe transportatio. 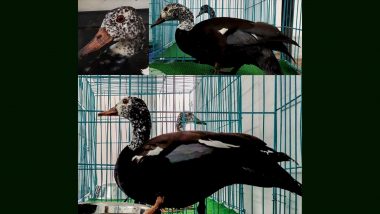 Guwahati, March 22: Two white winged wood ducks, one of the most endangered birds species globally, was imported from a Czech zoo and housed in the Assam state zoo in Guwahati, officials said on Monday.

Divisional Forest Officer, Assam State Zoo Dr Aswani Kumar said that the birds arrived from Prague, via Doha, on Sunday and now have been kept in the mandatory 45-day quarantine period. "After the quarantine period, the two white winged wood ducks would be kept in the specially made cage for public view," Kumar told IANS over phone.

He said that the Assam State Zoo would remain grateful for the efforts of Marketa Hersica and Roman Hersky from Zoo Zlin of the Czech Republic for providing the beautiful pair of the species and working against all odds even during the Covid pandemic to ensure their safe transportatio. Great Eared Nightjar, Rare Bird Species, Spotted in Upper Assam's Kakopathar (Watch Video).

The white winged wood duck, one of the most endangered birds (duck) species were once distributed across the South East Asian countries and northeast India, he added.

"Now only 800 to 1,000 survive globally of which about 450 are believed to be in India, Bangladesh and Myanmar. In Assam, the birds are found in key protected areas like Nameri National Park, Dibru Saikhowa National Park and the recently upgraded Dihing Patkai National Park," Kumar said.

He added that a small population of these birds are also believed to be present in Namndapha National Park in Arunachal Pradesh. According to the Indian Forest Service officer, due to its distinctive calls at night, it is locally known as the Deo-hah' (the divine duck).

Today is 'International Day of Happiness' & we have a reason to celebrate.

In view of the habitat loss of the birds and small surviving population, it is registered as endangered species on the International Union for Conservation of Nature's (IUCN) red list of threatened species and Appendix T in CITES.

Rarely spotted by common people, this magnificent and secretive species is making a homecoming to its native state for the people to experience their very own state bird in all its glory, he said. The ‘Rio’ Bird Blue Macaw Parrot, Among 8 Other Species, is Now Officially Extinct, Study Confirms.

Kumar also said that the Union Forest and Environment and Climate Change Ministry, the Assam Forest Department, the state's Principal Chief Conservator of Forests Amit Sahai, and PCCF, Wildlife, M.K. Yadava have taken much efforts to bring the two endangered birds to Assam.

State Forest and Environment Minister Parimal Suklabaidya on Monday said that the two white winged wood ducks, the state bird, will be the cynosure of all eyes.

(The above story first appeared on LatestLY on Mar 22, 2022 12:07 PM IST. For more news and updates on politics, world, sports, entertainment and lifestyle, log on to our website latestly.com).