A radio transmission from American Airlines from Cincinnati to Phoenix sounded like something straight out of a Sci-Fi movie. An AA pilot reported sighting of mysterious “long cylindrical object,” flying “really fast” over New Mexico as AA flight 2292 was heading to Phoenix. 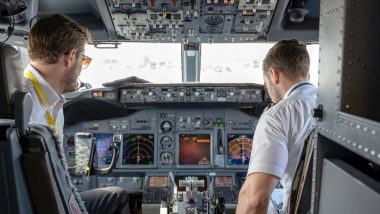 As our cultural fascination grew with extra-terrestrial life, the number of Unidentified Flying Objects (UFO) sightings increased. Tales of mysterious UFO sightings have been common. Every now and then, we come across reports of UFO being sighted in some part of the world. And this time, it was spotted over New Mexico. A radio transmission from American Airlines from Cincinnati to Phoenix sounded like something straight out of a Sci-Fi movie. An AA pilot reported sighting of mysterious “long cylindrical object,” flying “really fast” over New Mexico as AA flight 2292 was heading to Phoenix. The cockpit audio has now gone viral on social media, with the pilot explaining the flight’s close encounter with the unidentified object. The Federal Aviation Administration (FAA) is unable to explain the sighting.

2021 promises to be an important year for the advancement of UFO disclosure. At the start of the year, multiple people from Hawaii reported seeing blue lights flashing in the night sky and disappearing into the ocean. Again, just this week, social media users shared photos and videos of an unidentified object spotted in Ludhiana, India. The latest encounter by the pilot is another addition to the mysterious sightings across the world.

“Do you have any targets up here? We just had something go right over the top of us,” the pilot is heard saying in radio transmission recorded and published on the aviation blog, Deep Black Horizon. He added, “I hate to say this but it looked like a long cylindrical object that almost looked like a cruise missile type of thing moving really fast right over the top of us.” Radio interceptor Steve Douglass reportedly intercepted the transmission accidentally as he was trying to pick up another aircraft with a radio scanner. He used two flight tracking websites—Flightrader24 and Flight Aware, to determine the plane's exact position. His blog post includes a link to download the audio, which he named UFO.

After the reported incident, AA confirmed that the radio transmission came from flight 2292 and deferred further questions to the FBI. In addition, the FAA noted that the air traffic controllers did not see any object in the area on their radarscopes. While authorities are yet to explain the missile-like object, it is not the first time a pilot spotted unexplained flying phenomena. However, it is essential to note here that unexplained is not the same as extra-terrestrial.

(The above story first appeared on LatestLY on Feb 27, 2021 02:09 PM IST. For more news and updates on politics, world, sports, entertainment and lifestyle, log on to our website latestly.com).