What Is an ‘Apology Dinner?’ Internet Is Fascinated, Puzzled After a Reddit Post Goes Viral, Check Funny Memes and Jokes

Apology Dinner trended online after one woman asked Reddit on a popular sub, if she was wrong by asking attendees to bring dishes to hers. The post goes on to explain how her mother decided to host an Apology Dinner, for her older sister. Social media is filled with funny memes and jokes. 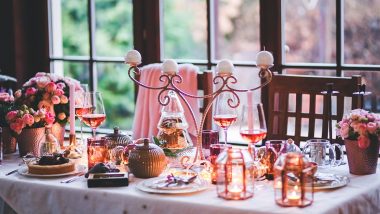 What the heck is an apology dinner? Families and cultures sure have their own traditions when it comes to food, but have you ever heard of an apology dinner? If your answer is no, you are not alone! Internet users are puzzled, fascinated, and desperately want to know what it is in the first place. The term is currently trending on Twitter, and other social media platforms, after a Reddit post went viral. What was bizarre to netizens is the viral post explained potluck, but used ‘apology dinner,’ in a very casual way as if everyone is acquainted with the concept. Only, they are not! Failed to get any proper explanation about the concept, some resorted to the best thing they ever can—make funny memes and jokes. McDonald's Chicken Burger Ice-Cream? Viral Video of Cold Stone Dessert Made Out Of McChicken is Flipping Netizens Out!

What is an Apology Dinner?

Apology Dinner trended online after one woman asked Reddit on a popular sub, AITA if she was wrong by asking attendees to bring dishes to hers. The post goes on to explain how her mother decided to host an Apology Dinner, for her older sister. She was left in charge of food and beverages, as her mom was ‘busy writing her apology.’ But when the guest list unexpectedly increased, she decided to make it a potluck affair. What is interesting here, is that the poster went on explaining what a potluck is, but no hint about the apology dinner. “We went forward with the Apology Dinner, but my sister call me the A**hole for undermining the apology,” the post added. Click HERE to read the viral post.

As it happened, no one knew the answer, because nobody knew what is an Apology Dinner is in the first place. Invested in the drama, social media was left wondering what on Earth this concept is. As the general tone shifted from confusion to amusement, people online reacted with funny memes and jokes! 'Follow Me For More Recipes' Trend With Memes on People's Lazy Cooking Skills.

me: i forgive u pic.twitter.com/E2VkpHyBUk

An apology dinner sounds about as fun as this pic.twitter.com/tgiJpMNSWk

Netizens Had to Contribute to the Unexplained Concept

What to Wear in an Apology Dinner?

WTAF is an Apology Dinner?

And what does one WEAR to such an event?? pic.twitter.com/JLhcDfNUfD

There's only one apology dinner worth talking about. pic.twitter.com/liZWigR1lr

I don't understand the concept of Apology Dinner, but I'm very curious what mom is apologizing for. 👀 pic.twitter.com/JBps1EqazE

The Casual Approach Though!

Also OP: ....but everyone obviously knows what an apology dinner is so I'm going to breeze right over that pic.twitter.com/ojQ7jY3wUc

A glance on the Reddit post comments section indicated that the poster had responded to questions about the purported custom of an Apology Dinner. The poster replied, “It where someone apologises to another person in front of the whole family.” Read the comment HERE.

There you go, the concept, apparently lies in the name! It is not unusual for these posts to go viral, but it sure puzzled the people online as they were seemingly desperate to know what an apology dinner is.

(The above story first appeared on LatestLY on Apr 30, 2021 09:52 AM IST. For more news and updates on politics, world, sports, entertainment and lifestyle, log on to our website latestly.com).