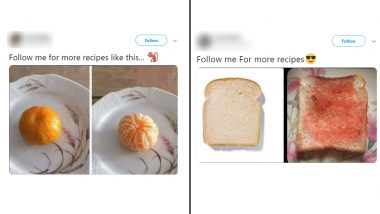 Social media these days has a new meme format coming in every week. Just when you think a format is going viral, there comes up another one and netizens like to participate in each one. Now the latest one has to do with food recipes, but thankfully it is not about weirdest food combinations. Called the "follow me for more recipes," people are showing their cooking skills or rather the lack of it. So pictures of peeled orange or a bread applied with jam are being tweeted with the caption, "Follow me for more recipes." And netizens have joined in to show the best of their so-called cooking skills. Woman Makes Maggi With Milk Instead of Water! Twitter is Disgusted With the Recipe Video (Check Viral Tweet).

A Twitter user @SreeBasu84 posted two pictures one of orange, another of the same fruit peeled. Her tweet went viral with over a thousand retweets and close to 9,000 likes. But she wasn't the first one, people were already sharing pictures to show off their cooking skills which include peeling a pomegranate, making jam-bread etc. So funny memes and jokes on them are being shared online. But honestly, it is still better than people trying out the weirdest food combinations and then sharing these pictures online, grossing everyone out. Remember the one with oranges in Maggi? Take a look at some of the funny entries on the latest "Follow me for more recipes" trend.

Can You Do It?

This is Quiet Difficult!

Do We Have a Winner?

The trend is still catching up and we can totally expect more such recipes flooding the Twitter timelines. So all you amateur cooks maybe it is time for you to participate and show off your talent.

(The above story first appeared on LatestLY on Jan 27, 2020 12:43 PM IST. For more news and updates on politics, world, sports, entertainment and lifestyle, log on to our website latestly.com).