In two separate incidents from Odisha and Madhya Pradesh, cobras were seen on the flagpole. 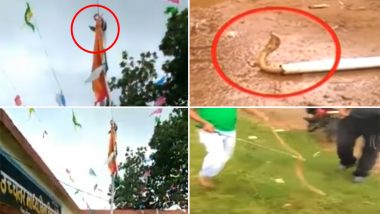 Two important festival days of Nag Panchami and Independence Day fell on the same this year. While Indians revered in the patriotism for independence day, some also worshipped the cobras for the festival of Nag Panchami. However, as coincidence would have it, flag hoisting occasions at two places saw cobras atop the flag poles. In two separate incidents from Odisha and Madhya Pradesh, cobras were seen on the flagpole. Cobra Swallows Onions and Vomits it Out, Bizarre Incident in Odisha Caught on Video!

A three-foot-long cobra was found inside an iron rod in Odisha in the hostel premises of Banki Autonomous College. The rod was meant to be used for flag hoisting on Independence Day. The students panicked on spotting the snake slithering inside the rod that was kept in the campus of Laxmi Narayana Modi Hostel. A snake helpline was called to rescue the snake who reached the campus. The rescue operation took about 2 hours.

Take a look at the video of the cobra found in flagpole in Odisha:

In a similar incident from Madhya Pradesh, a cobra was found atop a flag that was already hoisted. This incident took place in a school in the Baitul village, Hivarwadi. The school students and other villagers present around were scared on spotting the snake. But soon realising it was also the eve of Nag Panchami, they prayed to the cobra.

Watch video of Cobra on the top of a flagpole in Madhya Pradesh:

The students were amused with spotting the snake and also the little disturbances that came in their celebrations. A video from the place shows a cobra trying to erect itself at it is already on the top of the flag. The coincidence of spotting cobras on independence day, that too near our tricolour became a topic of great discussion among everyone.

(The above story first appeared on LatestLY on Aug 17, 2018 04:09 PM IST. For more news and updates on politics, world, sports, entertainment and lifestyle, log on to our website latestly.com).