Who is Arati Saha Featuring in Google Doodle? Know 9 Interesting Facts About the First Asian Woman to Cross the English Channel on Her 80th Birthday 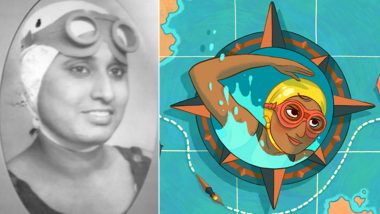 Google is celebrating the 80th birth anniversary of Arati Saha, an Indian long-distance swimmer and Olympian. And if you are wondering 'Who is Arati Saha featuring in the Google doodle?' then we have you covered. Born on September 24, 1940, in Calcutta (then British India), Arati learned to swim on the banks of the Hooghly river. She was later trained under the mentorship of India's top competitive swimmers, Sachin Nag. She won her first swimming gold medal at the age of five. For her achievements, she was awarded the Padma Shri in 1960. She made the country proud, on September 29, 1959, by becoming the first Asian woman to cross the English Channel. Today's Google depicts her 67 km route from Cape Gris Nez in France to Sandgate, England crossing the English Channel. On Arati Saha's 80th birth anniversary, we bring to you some facts from her life. Arati Saha Google Doodle Celebrates the Long Distance Indian Swimmer's Achievement on Her 80th Birth Anniversary.

1. At 18, Arati had attempted to cross the English Channel, but failed. She went back and did rigorous training and completed the journey.

2. One of the biggest milestones in her career was when she broke Dolly Nazir's all-India record in a 1951 West Bengal state meet.

3. Arati Saha swam 42 miles from Cape Gris Nez, France to Sandgate, England on September 29, 1959, and made the country proud.

4. Arati created history by reaching the English shores by covering 42 miles in 16 hours and 20 minutes.

5. Saha and Nazir then went to represent India at the 1952 Olympics.

6. By the age of 11, she had become a young swimming prodigy.

7. Bangladeshi swimmer named Brojen Das, who was the first Asian swimmer to cross the English Channel in 1952, recommended Saha to Butlin International Cross Channel Swimming Race organisers for an event to be held in 1953.

8. She was inspired to do by another Indian swimmer named Mihir Sen who was the first Indian to cross the channel.

9. Arati was honoured with a postage stamp by The Department of Posts in 1999.

The doodle is illustrated by a Kolkata based artist named Lavanya Naidu. In an interview, Naidu said Saha was "a known household name growing up" in Kolkata. She said, "I hope it adds to the celebration of female figures in our country’s history and of human resilience. I also hope it’s an inspiration to people everywhere to dream big, no matter where you come from."

(The above story first appeared on LatestLY on Sep 24, 2020 02:48 PM IST. For more news and updates on politics, world, sports, entertainment and lifestyle, log on to our website latestly.com).