Google is celebrating Arati Saha, a remarkable Indian long-distance swimmer & Olympian on her 80th birth anniversary. She was the 1st woman to be awarded the Padma Shri in 1960. Born on September 24, 1940, in Calcutta, she learned to swim on the banks of the Hooghly. During the mentoring, she won her first swimming gold medal at the age of 5. 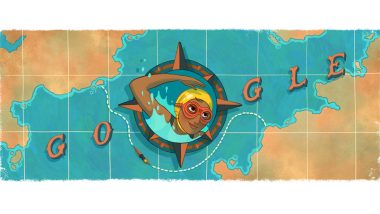 Google is celebrating Arati Saha, a remarkable Indian long-distance swimmer and Olympian on her 80th birth anniversary. She was the first woman to be awarded the Padma Shri in 1960 in honour of her achievements. Born on September 24, 1940, in Calcutta (then British India), she learned to swim on the banks of the Hooghly river. She was later trained under the mentorship of India's top competitive swimmers, Sachin Nag. During the mentoring, she won her first swimming gold medal at the age of five. Kamala Das Honoured as Google Doodle, Joins List of Indian Women Remembered by Internet Giant.

On 29 September 1959, Arati became the first Asian woman to cross the English Channel, swimming 42 miles from Cape Gris Nez, France to Sandgate, England. Later in her life in interviews, she was her inspiration to do so came from the Indian swimmer Mihir Sen. At 11, Saha became the youngest member on the first team to represent independent India in the 1952 Summer Olympics in Helsinki, Finland. She was one of only four women in the Olympics then.

Aarti set an all-India record in 1949 and broke Dolly Nazir's all-India record in a 1951 West Bengal state meet. She married her longtime manager, Dr Arun Gupta, in 1959. Arati Saha had one daughter, Archana who worked for the railways. The Department of Posts created a postage stamp in honour of Aarti Saha in 1999. Elena Cornaro Piscopia, the Great Academician Gets Google Doodle on 373rd Birth Anniversary: Know About World's First Woman to Get a PhD Degree.

Today's doodle shows Saha swimming along with a compass in the ocean, referring to her journey across the English Channel. The Google doodle has been illustrated by Kolkata-based artist Lavanya Naidu. In an interview, Naidu said Saha was "a known household name growing up" in Kolkata. She said, "I hope it adds to the celebration of female figures in our country’s history and of human resilience. I also hope it’s an inspiration to people everywhere to dream big, no matter where you come from."

(The above story first appeared on LatestLY on Sep 24, 2020 08:45 AM IST. For more news and updates on politics, world, sports, entertainment and lifestyle, log on to our website latestly.com).