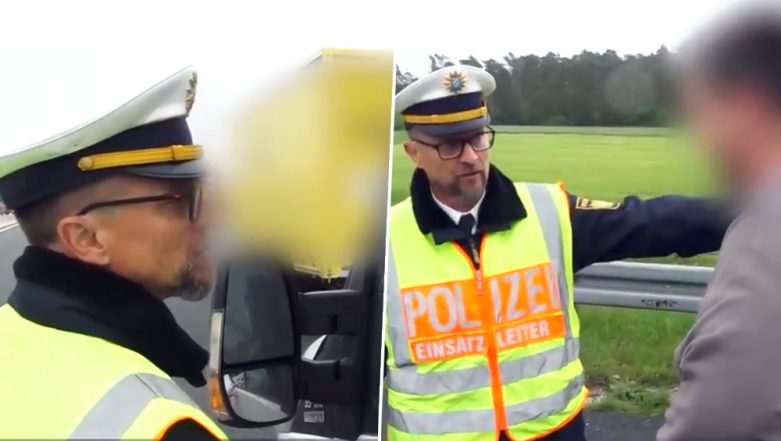 In this day and age where everyone has access to social media platforms and mobile phones that they can use to make anything go viral in no time, looks like people have stopped using their judgement skills to choose for things that are way more important than that. Recently, German police schooled a few drivers who were filming a fatal Autobahn crash and the video of him doing so went VIRAL for all the right reasons. The video of him teaching the drivers a lesson of life is being highly praised online. The officer stopped two 'rubberneckers' trying to take pictures of the crash scene on an Autobahn near Nuremberg. The officer's name is said to Stefan Pfeiffer asked if they wanted to take a closer look at the crash scene to make a point. He showed the world the flip side of such fatal road accidents. He urged the drivers saying, "Come on, ill show you something." He further said, "Do you want to see the dead people - make pictures? There he is, he's lying there, do you want to see him? No, you don't want to see him? Then why do you make pictures?" The people understood the point he was trying to make and refused his offer to witness the gruesome scene. Pfeiffer then said: "Shame on you" before hitting them with a €128.50 fine. WATCH VIRAL VIDEO: Drunk Passenger Kicked Out of Flight for Spitting on Child, Because She Didn’t Want to Sit Next to a ‘F*****g 3-Year-Old’.

"You want to see dead people, take photos, be ashamed of yourself!" In a fatal # accident on the A6, the #Polizei has made the #Gaffer to the speech."

Take a look at the video of the police officer schooling the drivers:

Here are some of the reactions on the video:

I need that policeman here in my country please!!!!

He is garnering all the respect

Where was he when Logan Paul needed him?

It is time that people understand the thin line between putting up things online and being STRAIGHT UP INSENSITIVE!  The police officer is being hailed all over Twitter for teaching the drivers a lesson.