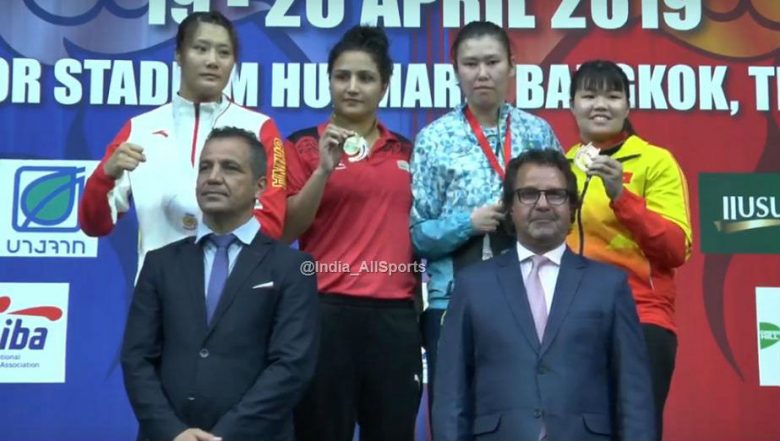 New Delhi, April 30: In 2009, when Pooja Rani decided to seriously pursue her career as a boxer, her father would check on her every evening fearing an injury could completely ruin the future of the girl, who was still in her teens. Pooja Rani Wins Gold Medal at Asian Boxing Championships 2019, Upsets World Champion Wang Lina in Finals.

On Monday, when the Indian boxing squad was felicitated by Boxing India (BI) for their extraordinary performance in the Asian meet, the 28-year-old Haryana girl was the star attraction. As India returned from Thailand with 13 medals - two gold, four silver and seven bronze - Pooja earned instant fame by winning the gold medal in 81 kg category for women.

Against China's Wang Lina in the final, Pooja was clearly at a disadvantage as her bodyweight was lighter by at least a couple of kilograms. "I knew she was heavier, but I did not bother much about it. I was quicker than her and I used it to win the final," said the 2014 Asian Games bronze medallist.

Despite winning the gold in the 81kg, Pooja is likely to move down to 75kg to stay eligible for the 2020 Olympics. Under the new rule, the five weight categories allowed in Olympics in women's boxing are 51kg, 57kg, 60kg, 69kg and 75kg.

"I would like to participate in the 75kg in Tokyo Olympics. As it is, my body weight is currently around 78kg. I don't think it is going to be a hard task to reduce the weight in the next one year. With strict regimentation and help of dietician, that is always possible," Pooja, a five-time national champion in the 75kg category, told IANS.

Talking about her early days, Pooja said: "My father's biggest problem was that boxing was a body contact sport. He thought that as a girl, I should not get injured, which could turn out to be a problem during my marriage. But I was determined. Finally, my local coach had to come to my rescue. The coach had a talk with my father and he relented."

Women's coach Mohammed Ali Qamar said the result could have been better. "In some of the bouts in the women's category, we ended up on the losing side and bagged silver or bronze medals. But the way our girls fought, many among spectators felt that with little more luck, the results of those bouts could have come in our favour," he said. Pooja Rani, Amit Panghal Bag Gold at Asian Boxing Championships 2019.

India's foreign coach Santiago Nieva made it clear it was only the beginning of the journey for Indian boxers. "The Asian meet was tough. But the World meet later this year is going to be tougher. Look at the medals tally and you will find even the hosts struggled in the face of such strong competition. But our boys and girls were extraordinary," he said.