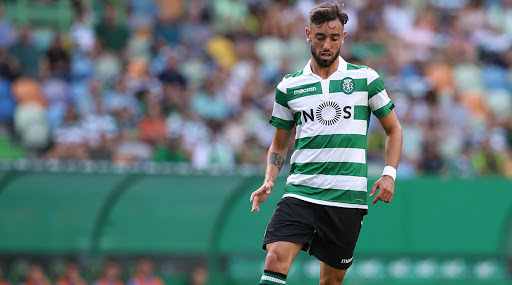 The Bruno Fernandes transfer saga has taken a new turn as English giants Manchester City have entered the race to sign the midfielder according to reports from Portugal. The Sporting Lisbon midfielder has been heavily linked with a move to Manchester United this summer but it looks like the Manchester City are ready to hijack the move. It was understood that Fernandes had agreed on personal terms with the Red Devils but a deal with the Portuguese club is not yet finalized and City could take advantage of this to snatch the 25-year-old from their red neighbours. Manchester United Striker Marcus Rashford Out Until February with Back Injury.

According to a report from Portuguese newspaper Correio de Manha, Manchester City are preparing a bid of £86 million which could see Bruno Fernandes join the Blue side of Manchester at the end of the season. The Lisbon midfielder looks keen on signing for the Red Devils but with the deal yet to be finalised, City can take advantage of this uncertainty in both the camps and bring the playmaker to their club. It was also reported that Sporting Lisbon increased Bruno Fernandes’s asking price as the record English champions look desperate to sign the player. The Portuguese side are asking for a transfer fee of £68 million but United are only willing to pay £50 million with a further £15 million in add-ons. Manchester City 2-2 Crystal Palace, Premier League 2019-20 Result: Fernandinho Late Own Goal Dents Defending Champions' Title Hopes.

Bruno Fernandes has been linked with a move to Manchester United since last summer but it looks like the other side of Manchester are ready to swoop in and steal the player for themselves. The 25-year-old has been brilliant for Sporting this season as he has been involved in 22 goals in 25 appearances this season, scoring 15 and assisting seven. City’s bid could outweigh United’s offer, hinting that Red Devils could miss out on their number one transfer priority.