Former NFL player Cedric Benson died in a motorcycle accident on Saturday. The American Football player, aged 36, died in the unfortunate accident in Texas, USA. The pillion riding with him on the motorcycle also died in the accident. Cedric was an NFL running back and Texas Longhorns star. 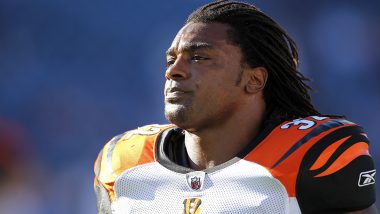 Former NFL player Cedric Benson died in a motorcycle accident on Saturday. The American Football player, aged 36, died in the unfortunate crash in Texas, USA. The pillion riding with him on the motorcycle also died in the accident. The pillion was only identified as a female in her 30s. According to reports, Benson’s motorcycle crashed into a minivan. On Saturday, Benson had shared an image of a BMW motorcycle in his Instagram story. He captioned the photo, “My Saturday Evening’. Ashley Cole Retires From Football at 38: Former England International Calls Time on Trophy-Laden Career.

The news of Benson’s death was confirmed by Benson's attorney Sam Bassett. “Cedric was not just a client, he was my friend. He was immensely talented and fierce on the football field yet most have no idea the difficulties he overcame to achieve what he did. Though imperfect in some respects, once Cedric was your friend you understood how kind, sensitive and loyal he was as a man. He was like a younger brother or nephew to me. I will miss him very much,” Bassett was quoted as saying by Austin American Statesman.

Cedric was an NFL (National Football League) running back and Texas Longhorns star. Benson had an eight-year career in NFL during which he played for Chicago Bears, Cincinnati Bengals and Green Bay Packers. He played for Longhorns from 2001-04. He played for Cincinnati Bengals from 2008 to 2011. He signed Green Bay for 2012 season of NFL but his career ended after he suffered a broken foot in October. In 2004, he won Doak Walker Award as the USA’s top running back. He still is No 10 on the all-time list of running backs.

(The above story first appeared on LatestLY on Aug 19, 2019 12:46 PM IST. For more news and updates on politics, world, sports, entertainment and lifestyle, log on to our website latestly.com).