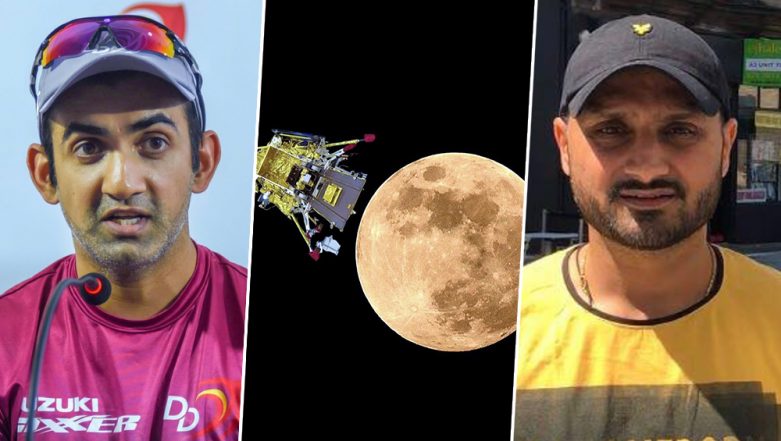 India fell minutes short from becoming just the fourth nation to complete a soft landing on moon when its spacecraft Chandrayaan 2 suddenly lost contact with the country’s space agency ISRO minutes before it was expected to undergo the soft landing. The entire country, including cricketer-turned-politician Gautam Gambhir, however, applauded the scientists’ effort for carrying out a mission that far despite the eventual failure. Gambhir – now a Parliamentarian – was joined by Harbhajan Singh and many former and active sportspersons in praising the space agency for their brave efforts.  Chandrayaan 2: Rahul Gandhi, Amit Shah And Other Political Leaders Unite in Lauding ISRO, Boosting Scientists' Morale After Communication Lost With Vikram Lander Just 2.1 km From Moon's Surface; Read Tweets.

“It's only a failure if we don't learn from our setbacks. We will come back stronger!” said Gambhir, an MP from the East Delhi Constituency, reiterating what PM Narendra Modi told the nation minutes after the spacecraft had lost contact with its carrier Vikram. The communication link between India's moon lander Vikram and the moon orbiter got snapped as the former was descending towards the moon's South Pole, said News agency IANS. Chandrayaan 2: Shah Rukh Khan, Akshay Kumar, Ajay Devgn and Other Bollywood Celebs Shower Praises on ISRO (Read Tweets).

Former Indian Cricketer and now politician, Gautam Gambhir praised the ISRO for their indomitable spirit and their determination into making a billion dreams come true. But even though ISRO fell steps short of creating history, Gambhir hopes "The best is yet to come."

We Will Comeback Stronger!!

It's only a failure if we don't learn from our setbacks. We will come back stronger! I salute the great spirit of team @isro for making a billion Indians dream together, as one. The best is definitely yet to come 🚀 #Chandrayaan2

Those that keep trying are never defeated, said another Indian international World Cup winner Harbhajan Singh. He praised the scientist and said that the entire country is proud of them.

Irfan Pathan was optimistic that there was something better to come. "We will reach the finish line," said the former Indian fast bowler.

We Will Reach Finish Line!!!

We started and we will reach the finish line...Proud of @isro proud of our 🇮🇳 #Chandrayaan2 #ISRO

Proud of You ISRO

We are proud of you @isro and everyone associated with this mission. The best is yet to come 🇮🇳 #Chandrayaan2

"The dream remains unfulfilled but our hopes are alive. We will be successful," said Sehwag when it was announced that the spacecraft had lost contact with its carrier.

Olympics medallist and former Sports minister Rajyavardhan Singh Rathore also praised the space agency for attempting something many hadn't even thought of. He also praised the Prime Minister for backing up the scientist in ther attempt to greatness.

No Failure is Final

We are proud of you #ISRO , there is no failure that is final, ability to take a step forward is in itself a step towards success.

Kudos to our PM @narendramodi ji, a true leader, being present personally and bucking up the morale of our scientists 👏

Another Olympics medallist Vijender Singh posted on social media that if not today, India will complete a soft landing on the moon some other day. Everyone should be proud and happy, he said.

If Not Today, We Will Reach Tomorrow

India is Proud of ISRO

Indian international, Ishant Sharma, who recently was part of the Indian team that whitewashed the West Indies in an entire series, also congratulated the ISRO for their efforts.

Salute to the passion and dedication of the people @isro Incredibly proud of the achievements in attempting something that no other nation has tried before- landing on the moons South Pole. 🇮🇳🙌 Jai Hind !!! #chandrayan2 #ISRO pic.twitter.com/BQsrRiwStu

The Vikram Lander successfully separated from Chandrayaan-2 Orbiter on September 2. The Chandrayaan-2 Orbiter continues to orbit the Moon in its existing orbit. The Vikram lander was planned to land on the far side of the moon between 1:30 am to 2:30 am on the intervening night of Friday-Saturday. This would have been followed by rover (Pragyan) roll-out between 5:30 am to 6:30 am.