India had a medal sweep in wrestling on August 5 with six medals won in as many events. With high spirits, the Indian athletes continue their journey at the 2022 Birmingham Games. Another name was added to the Indian record books as the powerlifter Sudhir clinched India’s first-ever gold medal at the para powerlifting event. 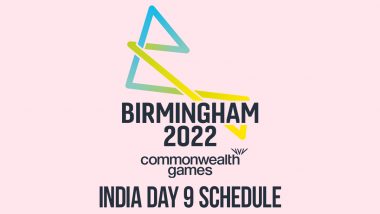 The 2022 Commonwealth Games also commonly known as the 2022 Birmingham Games, heads into the ninth day and Australia are at the top of the medal table followed by England and Canada in second and third positions respectively. India have also had a decent outing for far at the quadrennial event and are in seventh place, with a total tally of 20 medals and will aim to add to that as the competition progresses. Commonwealth Games 2022 Medal Tally Live Updated: Mohit Grewal Wins Bronze in Men's Wrestling; India Rank Fifth on Birmingham CWG Medal Table

With high spirits, the Indian athletes continue their journey at the 2022 Birmingham Games. Another name was added to the Indian record books as the powerlifter Sudhir clinched India’s first-ever gold medal at the para powerlifting event. After winning the gold, Sudhir takes the nation’s gold medal tally to six, which includes first-place podium finishes in weightlifting, lawn bowls, and table tennis.

On day 9, the Indian women’s hockey team will be playing their semi-final match against Australia, along with the women’s cricket team facing off against hosts England in their semis. The badminton men’s double team will be in action against Pakistan in the round of 16 and on the second day of wrestling, we will be seeing the two times Commonwealth Games champion Vinesh Phogat along with others.

Indian athletes will be pleased with their performances so far and will be hoping to win more medals before the competition ends. A number of boxers from the country are assured of medals after reaching the semifinals of their respective categories while the cricket and hockey teams are one win away from securing podium finishes.

(The above story first appeared on LatestLY on Aug 06, 2022 12:57 AM IST. For more news and updates on politics, world, sports, entertainment and lifestyle, log on to our website latestly.com).