From USA to Australia, from Canada to India, all the champion teams have arrived to participate in this Birmingham sports festival which was formerly known the British Empire Games Or the British Commonwealth Games. Scroll down below to check the all-time medal tally in the history of the Games. 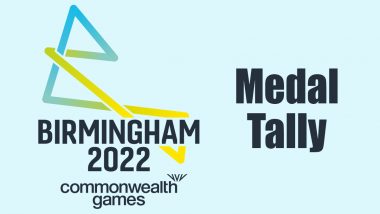 In boxing, Jaismine Lamboriya, Rohit Tokas and Mohammad Hussamuddin won bronze medals each on Saturday. Also, India's success at Lawn Bowls continued at CWG 2022 with a silver won by the men's fours team. Earlier, Avinash Sable added to India's medal tally at Commonwealth Games as he wins silver in the Men's 3,000m steeplechase final. This was India's second medal on the day after Priyanka Goswami had secured silver in the 10000m race walk. Achinta Sheuli, Jeremy Lalrinnunga and Mirabai Chanu had won gold in weightlifting. Lovepreet Singh, Harjinder Kaur, Bindyarani Devi, Sanket Sargar and Gururaja Poojary secured medals in their weightlifting respective events. Australia are at the top of the medal table with 154 medals and 58 golds so far. England are in second place on the medal table, having won 50 gold medals and 146 overall. Meanwhile, Canada are third in the standings and they have 84 medals in total.

CWG 2022 started on July 28 with an opening ceremony and will end on August 08. This UK event is the 22nd edition of the CWG and the sporting action will kick off at the Alexander Stadium on July 29 from 11:30 PM IST (Indian Standard Time) onwards. More than 70 nations have sent their athletes to grace the global multi-sports extravaganza and will be looking to take top standings on the 2022 CWG medal table with an increase in gold, silver and bronze medals tally. Nearly 3500 athletes will compete in more than 21 sporting categories and will be aiming to top the CWG 2022 medals tally. From the USA to Australia, from Canada to India, all the champion teams have arrived to participate in this Birmingham sports festival which was formerly known as the British Empire Games Or the British Commonwealth Games. Meanwhile, fans searching for CWG 2022 medal tally and country-wise standings can scroll down. 2022 Commonwealth Games Live Streaming Online: Get Free Telecast Details of CWG on TV in India.

India have sent a strong 214-member contingent to fight for all possible medals at Commonwealth Games 2022. PV Sindhu, Lovlina Borgohin, Nikhat Zareen, Mirabai Chanu and many other star athletes would aim for gold medals in Birmingham. India, sitting fourth on the all-time medal tally in CWG history with 503 medals (181 gold, 173 silver, 149 bronze) will look for more podium finishes this time than they did at the 2018 Gold Coast where they left the campaign with 66 honours, having finished third in the medal table. Meanwhile, the champion of the champions Australia will once again try to cruise their way to top honours in track and field event categories. The Aussies are miles ahead of other teams regarding a number of medals in the history of the Commonwealth Games. They have achieved an unimaginable number of medals- 2415 in total, having clinched gold honours 932 times- the most at CWG. Only the England team get close to them in the table, having won 2144 medals. Canada come third with 1555 titles at CWG. India at Commonwealth Games 2022 Medal Tally Live Updated.

Following the end of the World Athletics Championships 2022, all the nations would have their athletes perform at the highest level at Commonwealth Games 2022. Australia, India, Canada and other big countries have already sent their teams to the UK as the main event is only hours away. The most prolific event to watch for will be Women's Cricket which will make its debut at the Games. However, it's expected that the top five nations in the all-time medal tally will dominate the proceedings in Birmingham like in past years.

(The above story first appeared on LatestLY on Jul 30, 2022 03:51 PM IST. For more news and updates on politics, world, sports, entertainment and lifestyle, log on to our website latestly.com).