Ahead of ICC Cricket World Cup 2019, Here’s a Look Back at How South Africa Fared at the Last Edition of the CWC 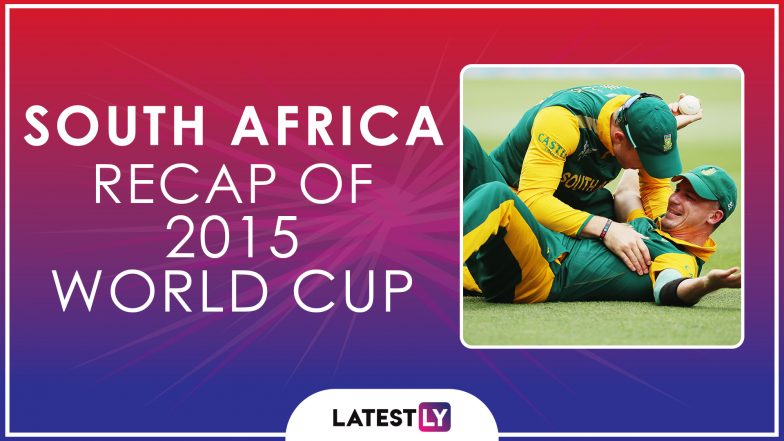 The Proteas have been the perennial underachievers when it comes to the Cricket World Cup with time and again faltering at the main stage. The tag of "chokers" must not be a pleasant one for the South African cricketers but their performances over the years have built a case for it. Be it the infamous 1999 World Cup Allan Donald run out or the last ball six off Dale Steyn or the rain-marred 1992 Cup exit, there have been plenty of heartbreaks. The team has been in good form going into the ICC Cricket World Cup 2019 but must show tremendous resolve to win it. A look back at how they fared in the last edition in Australia and New Zealand. Ahead of ICC Cricket World Cup 2019, Here’s 5 Disheartening Moments From Cricket’s Mega Tournament That Made Fans Emotional.

Group Stage: South Africa finished second in Pool B comprising of India, Pakistan, West Indies, Ireland, Zimbabwe and UAE. Their defeats came against Pakistan and India while they won the rest of the games to finish with 8 points and an NRR of +1.707.

Quarter-Final: In the quarters, South Africa faced the Sri Lankans in Sydney which turned out to be a paradise for the spinners. Imran Tahir and JP Duminy took seven wickets between them to bundle out Sri Lanka for 133. They chased down the total with nine wickets to spare to move to the semis. Imran Tahir was named the man of the match for his brilliant effort with the bowl. ICC Cricket World Cup 2019 Prize Money: Winners to Receive Four Million Dollars, Two Million for Runners-up.

Semi-Final: A game of high voltage drama where the two competitors- South Africa and New Zealand were separated by fine margins. In a rain-marred game, New Zealand were chasing 298 for a win in 43 overs and man of the match Grant Elliot hit a last-ball six to break South African hearts.

Most Runs for South Africa: South African talisman AB De Villiers got the most runs for his nation with 418 in 8 games at a staggering average of 96.40. He hit 1 century and 3 half-centuries in the campaign to lead his side by example.

Most Wickets for South Africa: South Africa pacer Morne Morkel was the pick of the bowlers for their side bagging 17 wickets in eight matches. He finished at fourth place in the list of most successful bowlers during the 2015 edition of Cricket World Cup.

South Africa like every ICC tournament have a brilliant squad on paper but they can be very unpredictable as the campaign goes on. If they play to their potential, they could lift their maiden World Cup.