The former left-arm pacer turns 43. Playing for India, Nehra put on several memorable performances. However, frequent injuries never allowed him to cement his place in the side. Nevertheless, he defied all the odds by making an international comeback at the age of 36 and ended his career on a high. 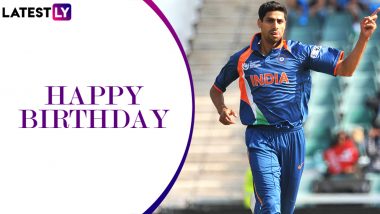 Former Indian speedster Ashish Nehra celebrates his 43rd birthday on Friday (April 29, 2022). The left-arm pacer possessed the ability to swing the ball both ways and that too with a brisk pace. Playing for India, Nehra put on several memorable performances. However, frequent injuries never allowed him to cement his place in the side. Nevertheless, he defied all the odds by making an international comeback at the age of 36 and ended his career on a high. Below, we'll look at Nehra's five best performances. Ashish Nehra Claims Lakshmipathy Balaji Was More Popular Than Imran Khan During India’s Tour of Pakistan in 2003–04.

The tall and lanky pacer made his international debut way back in February 1999 in a Test match against Sri Lanka. He served Indian cricket for more than 18 years which is a staggering record for a fast bowler. During the course, Nehra scalped 44, 157 and 34 wickets in 17 Tests, 120 ODIs and 27 T20I matches. Along with that, Nehra also put up some incredible performances in the Indian Premier League (IPL) and his tally of 106 wickets from 88 games speak volumes of his prowess. Now, let's focus on some brilliant spells by Nehra. IPL 2020 Only Possible if Normalcy Returns by October, Feels Former SRH Bowler Ashish Nehra.

4/72 Against Zimbabwe in Harare

India were in the backfoot after getting bundled out for mere 237 runs in the 2nd Test of 2001 Tour of Zimbabwe. However, Nehra made an impeccable use of the new red cherry in the second innings and helped his side make a comeback. He scalped four crucial wickets and registered his best figures in Test. However, the home side made a brilliant comeback and went on to clinch the encounter by four wickets.

6/23 Against England in Durban

Nehra breathed fire with the ball when India met England in the 2003 World Cup. Chasing a target of 251 runs, the Nasser Hussain-led side never looked in the hunt as they lost wickets in regular intervals. Nehra did the most damage by rattling the opposition's middle-order. His stats read 6/23 which are still the best for an Indian bowler in Indian history. Riding on his efforts, the Men in Blue won the game by 82 runs.

He ate a banana in drinks break & made the 🏴󠁧󠁢󠁥󠁮󠁧󠁿 batters dance to his 🍌 swing with some beautiful piece of seam bowling which will be revered forever.

6/59 Against Sri Lanka in Colombo

The left-arm speedster's second five-wicket haul in ODIs came against Sri Lanka in the final match of Indian Oil Cup 2005. Nehra took crucial wickets upfront and came back to continue his onslaught in the death overs. Sri Lanka posted a total of 281 runs. However, the total proved to be too much for the Indian batsmen as they went on to lose the match by 18 runs.

4/10 Against Royal Challengers Bangalore in Bengaluru

On a track where Chennai Super Kings (CSK) piled up 181 runs, the RCB top-order got rattled courtesy a sensational spell by Ashish Nehra. The veteran bowler scalped the top three batsmen which included the price wicket of Virat Kohli. The Men in Red & Gold failed to make any sort of comeback and eventually lost the game by 27 runs.

3/28 Against England in Nagpur

Another Ashish Nehra special came in the 2nd T20I of England's 2016-17 Tour of India. Batting first, the home side posted mere 144 runs. In reply, however, a 37-year-old warhorse produced a magnificent spell and changed the course of the match. After dismissing both the openers cheaply, Nehra came back to dismiss the dangerous-looking Ben Stokes. His efforts proved to be fruitful as India went on to win the game by five runs.

The star pacer bid adieu to all forms of cricket in October 2017. Post-retirement, Nehra served as a mentor by coaching RCB in 2018. He has been commentator as well and his views from the box were being loved by one and all. The former cricketer is currently the head coach of new IPL franchise Gujarat Titans.

(The above story first appeared on LatestLY on Apr 29, 2022 11:58 AM IST. For more news and updates on politics, world, sports, entertainment and lifestyle, log on to our website latestly.com).