Asia Cup 2020 to Be Hosted by Pakistan Cricket Board, Tournament Will Be Held in T20 Format

India won the Asia Cup 2018 earlier in September after defeating Bangladesh in the final. 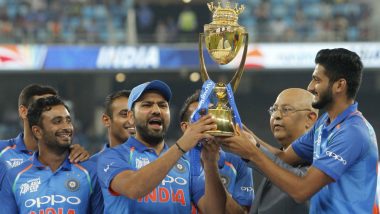 Pakistan Cricket Board (PCB) will host the next edition of the Asia Cup in 2020, most likely it will be held in the United Arab Emirates (UAE), the makeshift home venue for the Pakistan cricket team. Asian Cricket Council (ACC) President Nazmul Hassan Papon confirmed the development and the tournament is scheduled to take place in September. Wasim Khan Appointed as PCB's Managing Director.

This year, the Asia Cup was hosted by India in the UAE because of the political tensions between India and Pakistan. The tournament was originally scheduled to be held in India but was later moved to the UAE.

Just like the 2016 edition of Asia Cup, the upcoming one in 2020 will be played in the T20 format as it precedes the ICC T20 World Cup to be held in Australia in October-November. “The next Asia Cup will be hosted by Pakistan, and the hosting right belongs to them. Where they will host the tournament, it’s up to them,” Nazmul Hassan said while addressing the media after an executive board meeting of the ACC in Dhaka. BCCI vs PCB: Now Indian Cricket Board to Move Dispute Panel to Recover Legal Cost from Pakistan Cricket Board.

Following the terror attack on the Sri Lankan cricket team bus in 2009, only teams like Zimbabwe, West Indies, Sri Lanka, and World XI have visited Pakistan. Most of the major Test playing nations are not willing to tour Pakistan due to the security concerns.

India won the Asia Cup 2018 earlier in September after defeating Bangladesh in the final. India and Pakistan met twice during the tournament and on both the occasions, India emerged victorious.

(The above story first appeared on LatestLY on Dec 14, 2018 11:19 AM IST. For more news and updates on politics, world, sports, entertainment and lifestyle, log on to our website latestly.com).