Ben Stokes Will Do a Good Job if He Stays True to Himself, Says Trevor Bayliss

Former England head coach Trevor Bayliss has backed all-rounder Ben Stokes to do well as the Test captain "if he stays true to himself". 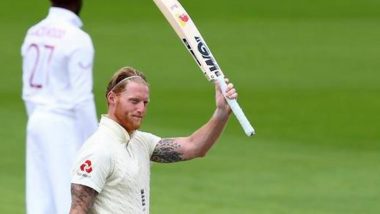 Sydney, May 4: Former England head coach Trevor Bayliss has backed all-rounder Ben Stokes to do well as the Test captain "if he stays true to himself". Having first endorsed Stokes as a potential Test skipper back in 2016 on England's tour of Bangladesh, Bayliss' prediction came true when the all-rounder was appointed as the skipper in the longest format of the game last week, replacing Joe Root. "We were on a tour of Bangladesh and the England journos asked at a press conference if there was anyone else in the squad besides Joe Root who could take over from 'Cookie' (Alastair Cook). I said Ben Stokes and they all laughed," Bayliss was quoted as saying by 'The Age'. Ben Stokes Keen To Get Jimmy Anderson, Stuart Broad in Test Squad; Says No To Joe Root for Vice-Captain’s Job.

Asked on how Stokes the Test captain will fare, Bayliss remarked, "I think he'll do a good job if he stays true to himself and continues on play the game in his fashion. He's one of those captains who will not only lead by example, which he does already, he'll do it with a very positive outlook. He's always looking for the positive angle to make things happen. I think he'll be good for the team." A lot has happened in Stokes' cricketing career for England. From the Bristol nightclub brawl which resulted in him missing the 2017/18 Ashes in Australia to losing his father Ged in December 2020 and then in last year, Stokes took a break from the game to protect his mental well-being before returning for 2021/22 Ashes. Kane Williamson Returns To Lead New Zealand for Test Series in England.

Bayliss, under whom England won the 2019 Men's Cricket World Cup at home, feels that Stokes has got all the capabilities in him to set the past incidents aside and approach Test captaincy with a fresh mind. "To be honest, I don't think those things really affected him too much one way or the other. That first incident was a long time ago and a lot of, plenty of water under the bridge now. There's been a lot of cricket since. Obviously with his dad passing that was sad, but he's got back into it, and he's done well since. It's just a part of life, isn't it? He's very good at getting on with it, and doing what he needs to do."

On Thursday, Stokes will turn out for his side Durham in the County Championship for the first time since being announced as England Test skipper against Worcestershire at New Road. His first assignment as the Test captain will be a three-match home series against current World Test Championship winners New Zealand in June.

(The above story first appeared on LatestLY on May 04, 2022 07:01 PM IST. For more news and updates on politics, world, sports, entertainment and lifestyle, log on to our website latestly.com).