Best Stumpings in IPL History: From MS Dhoni to Dinesh Karthik, A Look at Some Lightning-Fast Stumpings by Wicket-Keepers in Indian Premier League (Watch Videos) 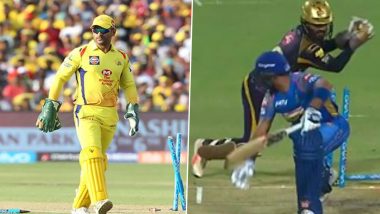 Fans must brace themselves as the 13th edition of the Indian Premier League (IPL 2020) is just around the corner. The gala T20 tournament has witnessed some mind-boggling cricket action in the previous seasons and the forthcoming competition is also set to stage on fire. Some of the best T20 players are contesting in the tournament, aiming to guide their side to the prestigious title. Dashers like Chris Gayle, Shane Watson, Virat Kohli and Suresh Raina have graced the games with numerous sensational knocks. In contrast, Lasith Malinga, Sunil Narine and Bhuvneshwar Kumar has entertained the fans with their jaw-dropping spells. Best Catches in IPL History: Kieron Pollard’s One-Handed Take, AB de Villiers' Gravity-Defying Catch and Other Top Catches.

Along with the blitzes with the bat and ball, many spectacular stumpings have been seen in Indian Premier League. Wicket-keeping is certainly a thankless job as the players behind the stumps aren’t getting much credit from their services. However, nothing could defy the fact that keepers play an essential role in this format of the game. To play a big shot, batsmen tend to charge down the track. The ball clears the rope if the connection is proper but if the batsmen is deceived, the keeper comes into play and dislodges the bails. From Chris Gayle to MS Dhoni, A Look at Players With Most Man of the Match Awards in Indian Premier League.

However, executing a stumping is not as easy as it looks. The keeper isn’t getting a good view of the ball with the batsman standing in front. Also, collecting the spinning ball and taking the bails off before the batsman comes back also takes some beating. However, many smart stumpings have been seen in IPL, which has left the batsmen shell-shocked. Have a look.

Dhoni and stumping go hand in hand. Hence, batsmen can’t afford to charge down the track without being sure. This mistake, however, was committed by Delhi Capitals captain Shreyas Iyer during his side’s match against Chennai Super Kings in IPL 2019. Iyer failed to read a ball from Ravindra Jadeja and put his foot out of the crease for just a millisecond. However, that much time was enough for Dhoni to take the bails off. Watch Video Here.

Another Dhoni special behind the stumps was seen when CSK locked horns with Virat Kohli’s Royal Challengers Bangalore in IPL 2018. AB de Villiers was new to the crease, but he tried to play a reverse sweep off Harbhajan Singh’s delivery. However, the veteran off-spinner showcased fabulous presence of mind and fired the ball down the leg side. Dhoni was alert as he executed yet another lightning-fast stumping. Watch Video Here.

3. Dinesh Karthik vs Rajasthan Royals in 2018

Karthik enjoyed a sensational run in IPL 2018 not just with the bat but with the gloves too. The Kolkata Knight Riders skipper was at his best against Rajasthan Royals as he executed a brilliant stumping and dismissed Stuart Binny. The all-rounder failed to read a spinning delivery from Kuldeep Yadav and went a bit forward. However, Karthik collected the ball neatly and smashed the stumps before Binny could reach back. Watch Video Here.

The star wicket-keeper didn’t affect just one but two sensational stumpings during KKR’s match against the now-defunct Rising Pune Supergiant in IPL 2017. He first dismissed the well-set opener Ajinkya Rahane as the latter failed to read Sunil Narine’s delivery and Uthappa didn’t take long in taking the bails off. Later in the game, the KKR star gave MS Dhoni a taste off his own medicine by stumping him off Kuldeep Yadav. Watch Video Here.

With the forthcoming season taking place in the spin-friendly pitches of UAE, wicket-keepers will definitely get a lot of chances to showcase their quick reflexes and run the batsmen out. IPL 2020 gets underway on September 19 with a match between arch-rivals Chennai Super Kings and Mumbai Indians. The marquee tournament is even more significant this time as it will mark the return of many key players after a long coronavirus-induced break.

(The above story first appeared on LatestLY on Sep 09, 2020 04:35 PM IST. For more news and updates on politics, world, sports, entertainment and lifestyle, log on to our website latestly.com).