long with batting and bowling prowess, however, fielding is also an essential aspect in this format of the game. On numerous occasions, a single run-out or a catch has changed the course game completely. Well, IPL fans must be aware of what an excellent fielding effort can do as many spectacular catches have been witnessed in the tournament over the years. 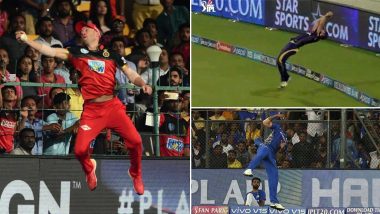 Cricket fans are nothing but ecstatic as the 13th edition of the Indian Premier League (IPL 2020) is right around the corner. The gala T20 tournament is a crucial part of India’s cricket calendar, and its craze is nothing but massive. Prominent T20 players from all over the world are contesting in the tournament with a desire to make a statement in the world’s predominant T20 competition. The previous 12 seasons of the tournament have witnessed many staggering spells alongside several astonishing knocks which has left the fans shell-shocked. From Chris Gayle to MS Dhoni, A Look at Players With Most Man of the Match Awards in Indian Premier League.

Along with batting and bowling prowess, fielding is also an essential aspect in this format of the game. On numerous occasions, a single run-out or a catch has changed the course game completely. Well, IPL fans must be aware of what an excellent fielding effort can do as many spectacular catches have been witnessed in the tournament over the years. With IPL 2020 taking a countdown, we’ll revisit five jaw-dropping catches taken in the tournament’s history. IPL 2020 Theme Song 'Aayenge Hum Wapas' Video Out: From 'Come On Bulawa Aya Hai' to 'India Ka Tyohaar', Here's A Look at 5 Best IPL Advertisements

The dashing Caribbean all-rounder took a screamer at the Wankhede Stadium and sent the dangerous Suresh Raina to the pavilion. Owing to the powerplay restrictions, the southpaw tried to smash a delivery from Jason Behrendorff over the ropes. Unfortunately for him, however, Pollard took an unbelievable one-handed catch and gave his side a major wicket.

Pluck it like Polly - Catch marvellous https://t.co/hWxzRtIXgC via @ipl

The former South Africa captain has been defying the odds time and time again. During Royal Challengers Bangalore’s (RCB) encounter against Sunrisers Hyderabad (SRH), the talismanic cricketer went against gravity and took a marvellous catch at the boundary rope to dismiss the in-form Alex Hales.

AB de villiers's catch in IPL like a "SUPERMAN"

That you would like to see again & again pic.twitter.com/z4r1e0Qj97

This catch by Chris Lynn just didn’t give Kolkata Knight Riders (KKR) a big wicket but also propelled them to an impossible-looking victory. RCB needed six runs in the last three balls and AB de Villiers was on strike. The Proteas maverick smashed a big shot in the fourth ball of the ball which looked set to go over the ropes. However, Lynn put up an exhibition of the extra-ordinary fielding and took a spectacular catch at the ropes.

Chris Lynn's amazing catch of ABD in IPL 2014 in UAE

Well, you definitely that a catch of that quality to dismiss an in-form Virat Kohli. The RCB skipper flicked a delivery of Harshal Patel in the leg-side and six runs were written all over it. However, Trent Boult had other ideas as he took an electrifying catch and sent the great batsman to the pavilion. In fact, the New Zealand pacer was himself astonished with his take.

Thus Trent Boult catch has been voted the best ever in the IPL #ipl pic.twitter.com/9X5T8ygQbd

Faf du Plessis is nothing short of a live wire on the field and that Proteas star has proved that on many occasions. One of his best catches in IPL was seen during the high-voltage CSK vs MI clash at the Wankhede Stadium. Kiwi all-rounder Corey Anderson failed to connect a big hit off Ashish Nehra’s delivery, but the ball looked like going in no man’s land. However, Du Plessis came flying and took a sensational diving catch.

Fans must brace themselves to many more spectacular catches as IPL 2020 is just days away. The opening game of the tournament will be played between arch-rivals Mumbai Indians and Chennai Super Kings on September 19. Notably, the boundaries in UAE are quite large. Hence, batsmen have to connect the shot properly, or else fielders in the ropes will get a chance to add their names in the above list.

(The above story first appeared on LatestLY on Sep 08, 2020 06:13 PM IST. For more news and updates on politics, world, sports, entertainment and lifestyle, log on to our website latestly.com).