David Miller Seen Playing With Aiden Markram's 'Balls' During One Of South Africa's Matches At ICC CWC 2019; Twitteratti Cannot Get Enough Of This Viral Video 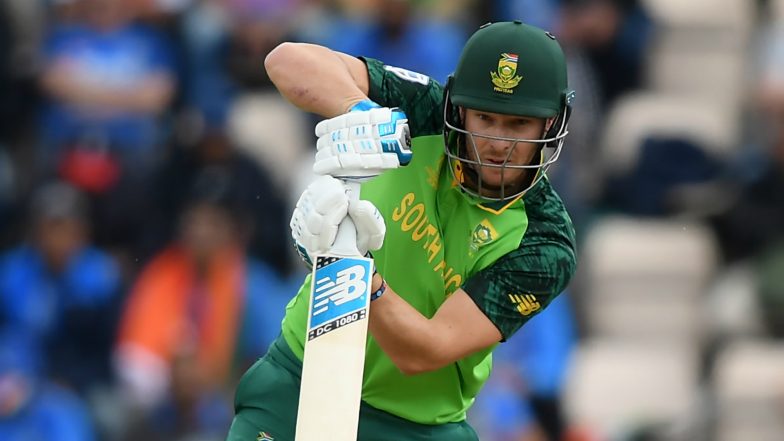 Its curtains down on South Africa’s campaign in the World Cup 2019. It was Pakistan who drilled the final nail in the coffin for bringing their exit to the campaign. Ahead of the game, David Miller was seen playing with Aiden Markram’s balls. Yes! You read it right. The video of the hilarious act went viral and social media can’t get enough of the same. The netizens posted hilarious tweets as a reaction to the video. So here’s the entire incident. Pakistan vs South Africa Highlights of ICC World Cup 2019 Match: SA Out of Semis Contention, PAK Stay Alive.

Now we are not sure if this incident happened during the match against Pakistan or New Zealand. This was during the game against Pakistan, where the teams headed to the dressing rooms after the national anthem was played. Suddenly, South Africa’s David Miller was seen playing with Aiden Makram’s balls. Not once but twice. The cameras on the field captured the act and were shared online.

Miller 🕟, good striker of the ball(s). If he struck them this well during #CWC19 Proteas would be on their way to the semis. pic.twitter.com/x0FOQ6hVh4

Here are a few hilarious reactions:

From the looks of it, Aiden Markram did not react. Maybe because he ignored it or did not realise the gesture. Talking about Miller, he surely did not have a great outing at the CWC 2019. In the last match against Pakistan, he could only score 31 runs in 37 balls.