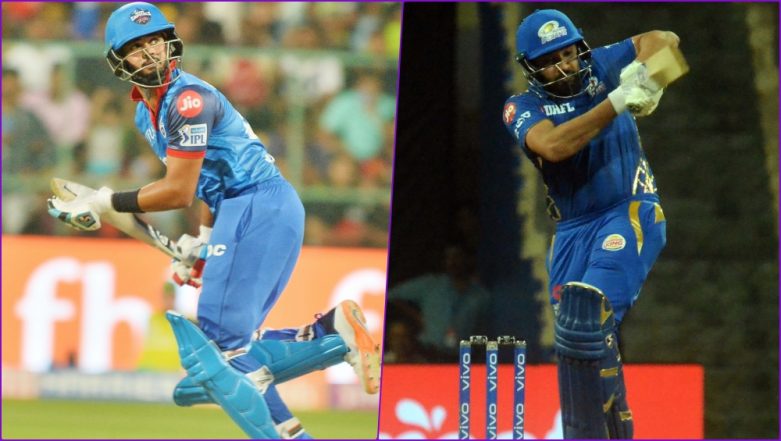 Delhi Capitals are currently above Mumbai Indians in the IPL table thanks to a superior goal difference, and a majority of fans may have not seen that coming when the league started. Ricky Ponting and Saurav Ganguly seem to have rejuvenated Delhi as they look more relaxed on the field and are playing with a lot of confidence. For the Mumbai Indians, some of the poor performances of the last season seem to have already been forgotten, but with a quality of the squad they possess, they are expected to win every game. In terms of head to head, Delhi leads Mumbai with 12 wins to 11 in the 23 encounters they have had in the past. A look back at their last five games. DC vs MI, IPL 2019 Match 34 Preview: Focus on Feroze Shah Kotla Pitch As In-Form Delhi Capitals Play Mumbai Indians.

Rishabh Pants’ magnificent hitting led the visiting Delhi Capitals post a massive 213/6 on board where at one stage even 190 looked a remote possibility. The wicketkeeper-batsman hit seven sixes in 27 balls 78 to enthral the audience. For Mumbai, Yuvraj Singh played single-handedly with a well taken 53 as they fell short by 37 runs. Delhi Capitals vs Mumbai Indians Live Cricket Score 34th T20 Match.

Delhi set Mumbai a target of 175 thanks largely to some late striking from Rishabh Pant and Vijay Shankar who accelerated beautifully in the end. Pant also top scored in the innings with a 64 scoring at a strike rate of 150. But Mumbai’s chase turned out to be a missed opportunity despite a 48 by Evin Lewis up top. Sandeep Lamichhane, Amit Mishra and Harshad Patel all picked up three wickets each to help Delhi win. Ahead of DC vs MI IPL 2019 Clash, Mumbai Indians Share Stats of Lasith Malinga Against Delhi and They Are Quite Impressive!

Jason Roy led a spectacular chase for Delhi as they overcome a huge batting effort by Mumbai Indians where they had hammered 194/7 batting first. Englishman Roy needed only 53 balls to get to his 91 and remained not out in the end to take his side home. He was ably supported by Rishabh Pant who contributed with 47 runs.

One defeat that Delhi will want to remove from their history if they could as they failed in all departments. West Indies powerhouse Lendl Simmons and Keiron Pollard hit the sixties to take Mumbai Indians to 212/3. Delhi’s innings in reply lasted only 13.4 overs as they were bundled out for 66 to lose by a massive 146 runs. Harbhajan Singh and Karn Sharma picked up three wickets to lead the visitors’ assault.

Man of the match Mitchell McClenaghan snapped three wickets to reduce Delhi to 24-6 who were in pursuit of 143 for a win. Kagiso Rabada and Chris Morris then forged a 91 run partnership to almost take their team home, but it was not enough in the end. The see-saw battle finally went the way of Mumbai Indians who showed great composure in difficult situations.

Delhi have won the last three games against Mumbai, and they will fancy themselves to take another two points off them at home this time.